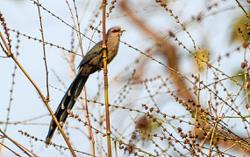 BUTTERWORTH: With the inter-district ban lifted, bird lovers wasted little time to throng an educational forest here to capture the images of their feathered friends.

They clicked the shutters throughout the day once the birds were in plain sight at Air Hitam Dalam Educational Forest peat swamp here.

One of them was Hneah Joo Aun, who loves to spend the day documenting and uploading the images of birds to an online database.

“Many migratory birds came in August and September last year and they are about to leave now.

“With movement restrictions and little traffic in the area during the conditional movement control order period, the beautiful birds are easy to spot in their natural environment.

Armed with a 600mm telephoto lens with convincing camouflage, Hneah and several other photographers waited patiently for the birds to turn up among trees. An image of the Streak-breasted woodpecker taken by Hneah at the forest.

The continuous clicking could then be heard and in less than a minute, the thrill was over.

The group of avid photographers then shared information about the bird while waiting for the next subject to come.

Hneah said he got hooked on the hobby of bird shooting (photography) about three years ago.

“About twice a month, we will visit this forest due to its easy accessibility and abundance of birds.

“As part of our contribution towards conservation, photos taken are then submitted to eBird, an online database of bird observations.

“Data collected will provide scientists, researchers and amateur naturalists with information on bird distribution and abundance, ” he said.

At another corner of the forest, retiree Alex Lim said he switched from his underwater photography hobby to capturing shots of birds when the MCO was first imposed in March last year.

“I used to dive a lot to capture photos of aquatic life which are vibrant and endless in varieties.

“But since the first MCO, I switched from underwater to capturing wildlife in the air – birds.

“I am happy with my photos taken in this forest which is small yet populated with birds.

The 11ha forest, featuring at least 241 species of birds, is managed by the Department of Wildlife and National Parks (Perhilitan).

It also features a 210m long suspension bridge, observation towers and over a kilometre of boardwalk for visitors to explore and learn about peat swamps.

Besides lizards, crabs, otters, squirrels and several species of monkeys, birds such as the Asian openbill storks, Asian glossy starlings, Mangrove pittas, Racket-tailed drongos, Crested serpent eagles, barn owls, and both Collared and Ruddy kingfishers have been spotted in the forest.

Admission to the park, which is open daily, is free. 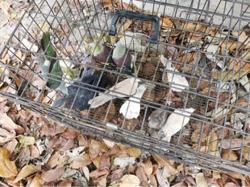