PETALING JAYA: The Road Transport Department (JPJ) and the Land Public Transport Agency (Apad) were ordered to review summonses issued to lorry drivers for carrying excess loads when transporting goods is due to weaknesses in the Road Transport Act 1987.

Transport Minister Datuk Seri Dr Wee Ka Siong said this adding that loopholes in the act allowed unscrupulous freight companies to take advantage of their drivers, citing instances of drivers whose licences were blacklisted after being forced to carry excess loads.

"This will compel JPJ to blacklist that driver," he said in a Facebook post on Sunday (April 4).

Dr Wee explained that the JPJ and police would issue summonses to these drivers under Section 63 of the RTA, compelling them to be present for an inspection at JPJ weigh stations.

"If they fail to be present at the JPJ weigh station, the driver will be fined. That is why many drivers refused to be weighed because their employers refuse to pay their summonses."

Dr Wee said he had ordered JPJ to review such summonses and if there is a need, draft new standard operating procedures for enforcement on lorries carrying excess loads.

"Who benefits from such incidents? Definitely, it's the employers. Isn't it fair to place the burden of responsibility on employers as well as on drivers?

"That is why I asked the Apad director-general to hold discussions with JPJ and the police to find a solution that is fair and just," he said.

At the same time, Dr Wee said that the authorities would not tolerate issues pertaining to speeding and dangerous driving.

"I 100% agree that the JPJ or police should take action against the driver. There will be no forgiveness," he said.

Calls for the Transport Ministry to review summonses issued to lorry drivers came following woes expressed by a lorry driver who had his driving license blacklisted after his employer refused to settle summonses. 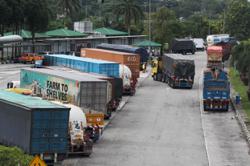