PETALING JAYA: Lee Zii Jia nearly hung up his racquet when he was 12 years old because he felt he was not strong enough, his elder sister Zii Yii revealed.

Fortunately, his family talked him out of it and 10 years later, Zii Jia is the 2021 All England champion, the most prestigious title in the world of badminton.

Zii Yii, who is also a former national shuttler, recounted how Zii Jia, 22, had contemplated throwing in the towel after going from hero to zero in just a year.

“Zii Jia is a gifted player, he’s meant for badminton, ” she said.

“At 11, he was already beating players older than him in the national Under-12 competitions. No one could come close to him.

“But when he was 12, everything went wrong for him. He struggled to perform and was so demoralised that he wanted to quit.

“He is tall and well-built now, but in those days he was short, skinny and outmuscled by his peers.

“Our family and the coaches encouraged him to keep playing. He made it to the Bukit Jalil Sports School (BJSS) squad (the Badminton Association of Malaysia’s national junior squad) at 13, ” she said.

She said the first year was tough for Zii Jia, saying that his coach was not dedicated.“Our parents almost wanted to withdraw him from the squad. But Zii Jia knew what he wanted – to become a top shuttler – and persevered. The rest is history, ” she said.

Zii Yii also recounted how she and Zii Jia were introduced to badminton in 2004 when their parents Lee Chee Hin and Leow Siet Peng, both former national basketball players, signed them up for badminton lessons at ASRC Hotel in Alor Setar during the school holidays.

“Our first-ever coach at ASRC was Sir Hou (Tan Seng Hou). We spent our early years there and also at MRC and Kedah BA prior to joining BAM, so we trained under many coaches.

“For Zii Jia, I think the few unsung heroes who were instrumental in his development are perhaps Zhou Kejian and Poh Chai Boon in BJSS and Indra Wijaya when he was first promoted to the senior team (in 2017), ” she said.

“He was also blessed to be trained under the likes of Datuk Misbun Sidek later on and currently Hendrawan and Datuk Tey Seu Bock.”

Zii Jia first stepped into the limelight when he won bronze at the 2016 World Junior Championships in Spain. He also helped Malaysia finish as runners-up in the team event.

In 2017, he notched his first senior title by winning the Polish International Series and won his maiden World Tour at the 2018 Taiwan Open.

Zii Jia’s exploits were timely as Malaysian badminton was in need of someone worthy to succeed Lee Chong Wei, who was diagnosed with early stage nose cancer.

Chong Wei retired in mid-2019, paving the way for Zii Jia to become the national No.1 at just 21. 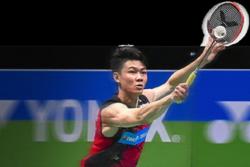