PETALING JAYA: Datuk Tey Seu Bock did not get to watch Lee Zii Jia’s match because of food poisoning.

But Seu Bock did not mind this as Zii Jia cooked up a storm in Arena Birmingham on Sunday when he dethroned Viktor Axelsen of Denmark 30-29,20-22,21-9 to win his first All-England title in style.

“I was unable to join as I was really sick because of something I ate. I forgot all my pain when I watched him play. I am just so proud of him, ” said Seu Bock.

Seu Bock hoped Zii Jia would be an inspiration to others.

“He was down after the Thailand Open tournaments but not for long. He worked really hard to bounce back in Europe. He showed some improvement in the Swiss Open but was a class above in the All-England, ” said Seu Bock.

“I hope others will show the same kind of determination.”

Although there were no top players from China, South Korea and Indonesia, Seu Bock said credit should not be taken away from Zii Jia. The Malaysian had also beaten two-time world champion Kento Momota of Japan in the quarter-finals.

“He knocked out world No. 1 and world No. 2 and that surely speaks volume of his ability. Even if others were there, he would have shown the same fighting spirit.

Meanwhile, Choong Hann admitted that Zii Jia was given a show cause letter after the outing in Thailand at the start of the year.

“I had to be fair with every player and those who did not perform to the expectations were reprimanded, including Zii Jia, ” said Choong Hann.

“But even if the letter was not given, Zii Jia would have given his best in All-England. He was bent on proving himself.

“There were negative feedback after his performances in Thailand but I’m proud that Zii Jia took it all positively and justified his position.

Zii Jia will take part in the Opens in Malaysia and Singapore in June, the two Olympics qualifying tournaments before the Tokyo Games. With his recent performance, Zii Jia is now seen as one of the potential medal contenders in his first Olympics. 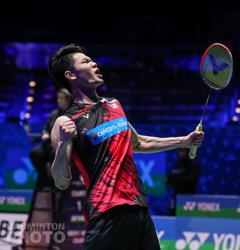