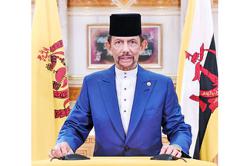 IPOH: Perak DAP vice-chairman Dr Abdul Aziz Bari (pic) has lodged a police report claiming the party and his name were implicated as the reason for the court ruling allowing Christians to use the word "Allah".

The state opposition whip said that an irresponsible person claimed that affidavits made by him, lawyer Syahredzan Johan and Election Commission deputy chairman Dr Azmi Sharom were the reason Justice Nor Bee Ariffin made the decision.

“I was at home on March 19 when I received a WhatsApp message from my media officer on a poster accusing the party, me, and the other two, ” he told reporters after lodging the police report.

Dr Abdul Aziz said he gave an affidavit over the issue in his own capacity five years ago.

“It has nothing to do with the party. I am not sure whether Syahredzan and Dr Azmi have lodged police reports yet. I am hoping that the police will investigate as to who made such a poster, and made it go viral, ” he added.

On March 10, the High Court ruled that Christians nationwide are allowed to use the word "Allah" and three other Arabic words in their religious publications for educational purposes.

The three other words are Baitullah, Kaabah and solat.