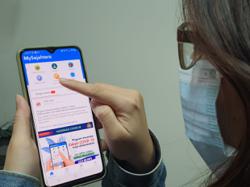 First step: A woman looking at her phone after registering for the Covid-19 vaccination via the MySejahtera app. — AZHAR MAHFOF/TheStar

PETALING JAYA: MySejahtera users who have registered interest in the Covid-19 vaccine will be able to track their registration process on a timeline, following an update to the app’s user interface.

The app will now allow users to see a timeline which displays the progress of their registration.

The timeline shows their registration date, along with this message: “You have successfully registered for the vaccination programme. The next steps will be enabled once you become eligible as per the National Immunisation Plan.”

But some were confused whether the update meant they needed to re-register their details, prompting Science, Technology and Innovation minister Khairy Jamaluddin to clarify that users need only register once for the vaccine.

Khairy tweeted that the app would send a push notification to users to acknowledge that they have registered for vaccination.

“Wait for the push notification. Don’t register again. For those who see a later date of registration, rest assured we have a record of your first try.

“Appointments will be given based on the first time you registered, ” he said.

Khairy also replied to a Twitter user who thought that her first registration did not go through and had expressed concern that her effort to register early went to waste.

“Your first attempt is logged in and recorded in the back end. You will get your appointment based on that first registration, ” he said.

could wait for another two weeks for an update to allow his mother to be registered under his father’s MySejahtera app as a dependant.

“Yes YB. You can wait for the ‘dependants’ feature. We will give your parents an appointment at the same date or time so they can go together, ” he said.

The Health Ministry said: “Users will start seeing the timeline displayed. If there is anyone who still hasn’t seen such a timeline, there is no need to re-register.

Starting today, Malaysians will also be able to register for the vaccine through a hotline as well as the dedicated website www.vaksincovid.gov.my.

Facebook user Nirmala Balakrishnan Nair wrote: “They should have a system where once you register and it is acknowledged, you shouldn’t be able to register again.”

Michael Sak concurred, saying: “The app wasn’t ready. You cannot keep modifying on the fly and expect the lay public to know what to expect. An acknowledgement is a minimal requirement upon completion of registration.”

Catherine Wong said she received the timeline display after she confirmed her details.

“On my first try, I wasn’t sure if I had registered. I checked again and the timeline now appears, ” said the homemaker in her 50s.