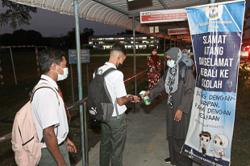 GEORGE TOWN: After several postponements, Form Five students are relieved and happy to finally be able to sit for their SPM examination.

At SMK Raja Tun Uda here in Bayan Lepas, Nurul Najwa Rizal Husaidi, 18, said she was excited that the long wait was finally over.

“My friends and I have waited so long for the exam. We are just happy to be able to get it over and done with.

“Although we do feel nervous about certain subjects, the long wait was so stressful for us.

“When it was announced that the exam had been postponed from October last year, we thought it was a short delay.

“We did not expect it to last this long until February, which is already in the new school term, ” she said yesterday.

As preparation, Nurul Najwa said she had been doing virtual learning and revisions on her own.

“There are subjects that I am more nervous about like Add Maths, Physics and Chemistry. But overall, I think I can do well, ” she said.

Another student, Muhammad Akafha Rufli, 18, was just happy to be able to sit for the exam.

“I think this is a good start with Bahasa Melayu as the first paper. I am not so worried.

“Although I have not done exceptionally well in my revisions, I am still happy to finally take the SPM exam.

“The few months at home had been quite stressful as I could not focus like I usually did in school.

“The candidates include those from private schools, boarding schools and sekolah agama.”

In Sabah, a total of 52,207 candidates will be sitting for their SPM, SVM, STAM and STPM examinations.

Meanwhile, Bernama reported that the country’s 401,105 SPM 2020 candidates will go down in history as the first batch of Fifth Formers to sit for the much-delayed public examination in the new norm due to the Covid-19 pandemic.

The examinations are being conducted with strict adherence to standard operating procedure, with 48,014 invigilators deployed nationwide.

Candidates are required to submit a health declaration form daily before entering the examination hall.

In Selangor, Deputy Education Minister Muslimin Yahaya said he was satisfied with the SOP compliance at SMK Yoke Kuan, Sekinchan, during a visit there.

For this year’s SPM, the school had also set aside preparation, isolation and quarantine rooms for students’ convenience, said Muslimin. 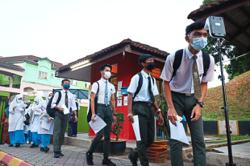