However, some candidates want the safety measures to be stricter.

Fong Mae Xin from SMK Taman Connaught, Kuala Lumpur, said the teachers constantly reminded everyone to maintain physical distancing from the moment they lined up to enter the school.

“If anyone breached the SOP, they will be immediately told to sit in their places and reminded about the Covid-19 pandemic that we are facing now, ” she said after her Bahasa Melayu Paper 2 yesterday.

Although grateful for the efforts put in by her teachers to keep everyone safe, she felt that they needed to be stricter still and the SOP tightened.

“After the exam was over, we were all allowed to leave at the same time, causing almost 60 of us to crowd the exit of the examination hall, ” she said.

She added that on arrival earlier, she was screened for her temperature after stepping out from her car and before submitting her Covid-19 health declaration form to a teacher at the entrance. 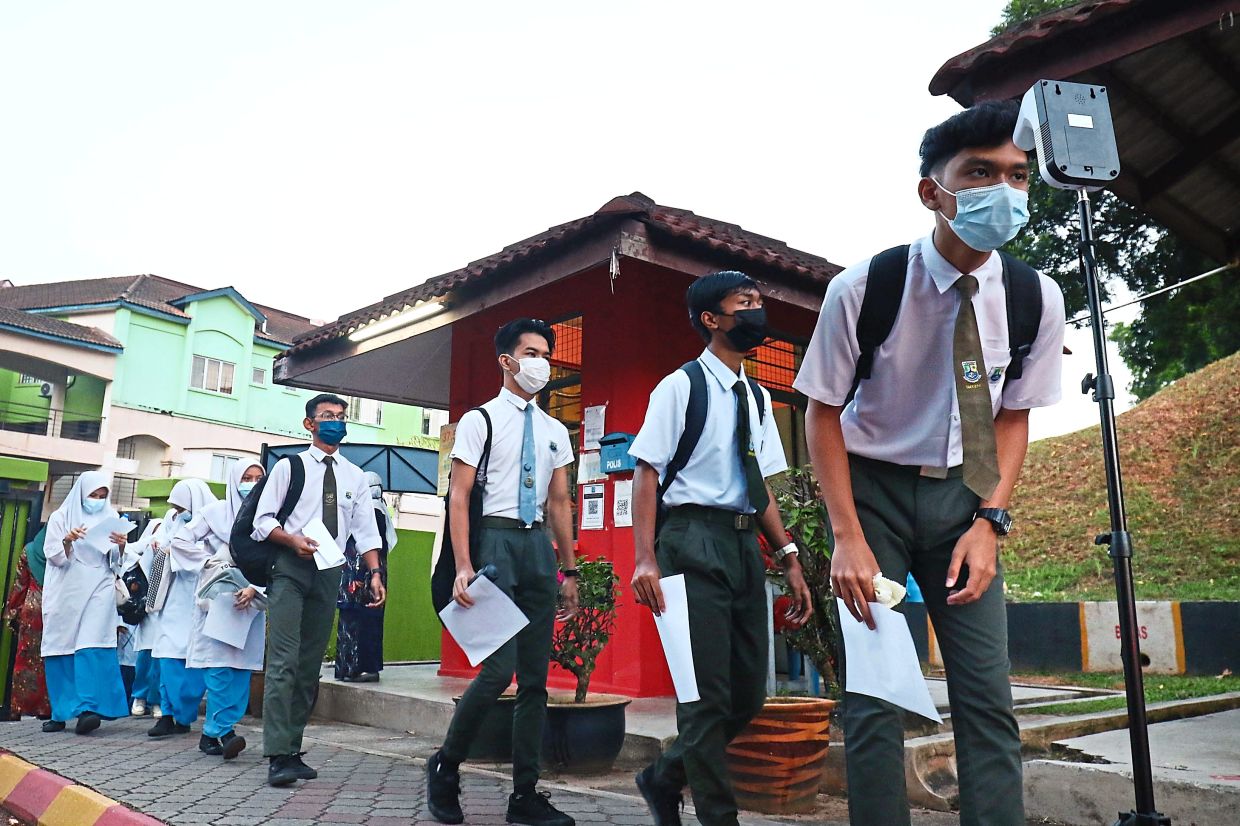 Ready for the test: Candidates queuing up to take their temperature on the first day of the SPM examinations at SMK Bandar Tasik Puteri in Rawang. — FAIHAN GHANI/The Star

The form is part of the Public Examinations and Central Assessments guideline prepared by the Education Ministry to ensure the candidates are not showing any Covid-19 symptoms.

Annetta Pushpanathan said the SOP was so strict that she could not even discuss notes or past year exam questions with her friends prior to the start of the exam.

The candidate from Paragon Private and International School, Johor, said the teachers were very alert in supervising the students and anyone caught breaking the SOP would immediately receive warnings.

She also said that it was “terrifying” to sit for these long-awaited examinations.

“I haven’t been able to study well during these few months with all the uncertainties caused by the pandemic, ” she said, referring to the school closures and the shifting of SPM exam dates.

“But the time has finally come and I don’t think I have much of a choice but to try harder and finish these exams, ” she added.

In Perak, Nur Ayesha Imani from SMK (P) Methodist said most of the candidates in her school kept to themselves after entering the school gates and put in waiting rooms before they were allowed to enter the exam hall.

She said that her school principal went around reminding everyone to maintain their distance from one another while giving them pep talks.

“I would like it if we could be two or three metres apart (instead of one metre).

“That will help put our minds a bit more at ease, so that we don’t stress over catching the virus.

“Realistically though, it is not doable, especially in smaller schools, ” she added.

National Union of the Teaching Profession secretary-general Harry Tan said teachers and school administrators were aware of the dangers if the SOP was not followed strictly.

“Teachers) are doing as well as they can, considering that this is part and parcel of their job to invigilate and ensure the validity of the exam.

“But this year, they need to take extra precautions to keep the pandemic at bay and at the same time, ensure that the candidates get through the exam, ” he noted.

Based on the experience of maintaining the SOP during the SPM examination, he said the similar School Management and Operations Under the New Norm 2.0 guideline which was also set by the Education Ministry would ensure students’ safety when schools begin to reopen.

Tan added that the union had no additional requests to add to the safety measures for the examination as “all possible eventualities have been looked into by the Examinations Syndicate”.

Melaka Action Group for Parents in Education chairman Mak Chee Kin said it was easier to comply with the SOP because only 20% of the school’s population was present today.

“But the same cannot be said if all the students return simultaneously and we have seen how enforcement can be lax as time goes by, ” he said.

He said the Education Ministry should take this as a benchmark and allow students to return to school on a rotational basis as it was easier to maintain the SOP when the number of students was kept small.

Parent Action Group for Education Malaysia chairman Datin Noor Azimah Abdul Rahim said it was too soon to tell if it was wise to benchmark the reopening of schools with the safety measures put in place for SPM 2020.

“Nonetheless, schools need to weigh the benefits of returning against the risk of getting infected, ” she said, highlighting that the World Health Organisation had stated that the infectivity rate of students was only 0.026%.

“As long as the SOP is adhered to strictly from home to school, students should not get infected.

“Right now, the benefits outweigh the risks, ” she added.

She also said schools would have to consider the mental health and well-being of students as priority when they reopened next week.

Education Minister Datuk Dr Mohd Radzi Md Jidin said based on his visit to SMK Saujana Impian, the school was adhering well to the SOP.

“The situation was under control and the exams ran smoothly, ” he said in a Facebook post yesterday.

The SPM 2020 batch sees 401,105 candidates sitting for their examinations under the watchful eyes of 48,014 invigilators, who not only had to maintain proper conduct of the examination but also ensure strict compliance with the SOP.