PETALING JAYA: A lorry driver and his attendant have been arrested for allegedly sodomising a waiter.

The two men also allegedly forced their victim to perform oral sex on them.

"The victim is a 20-year-old man who works as a waiter at a restaurant in a Damansara shopping mall.

"He was jogging alone near his house at PJU 6A when he came across the two suspects drinking there," ACP Nik Ezanee said in a statement on Monday (Feb 22).

He said according to the victim, the two men started making conversation and asked him a number of questions before one of the suspects grabbed his arm and instructed him to ride pillion on a motorcycle.

"They brought him to a house in Kampung Sungai Kayu Ara. He tried to resist but failed.

"The victim claims he was sodomised eight times by both suspects and was forced to perform oral sex on them," he said, adding that when they were done, they sent the victim back to an area near his house.

ACP Nik Ezanee said the victim has been sent for a medical examination at the Universiti Malaya Medical Centre.

"Based on intelligence gathered, a police team arrested both men at Kampung Sungai Kayu Ara at around 11pm on Sunday (Feb 21).

He added that the case was being investigated for committing carnal intercourse against the order of nature and using criminal force to outrage the modesty of a person.

"Both suspects have been remanded for seven days to facilitate further investigations," he said. 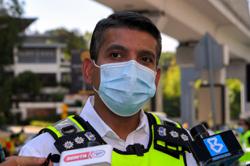