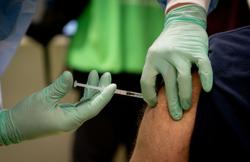 Comprising individuals of all backgrounds, the 62 volunteers arrived at the hospital's Clinical Research Centre (CRC) where they took turns receiving the vaccine shots.

The process which was done in less than five minutes was simple but the centre's head Dr S.L. Vijaya Kumar said the volunteers will need to return in two weeks for another jab, follow-ups within the next six weeks, and phone interviews will be conducted within a one-year period.

"All volunteers are over 18 years old, healthy subjects with no serious illness and have undergone health tests including a Covid-19 test prior to allowed to join the trial.

"Half of the volunteers will randomly receive the real vaccine and the remaining will get placebos.

"Results of phase one and phase two tests are safe with no adverse effects and our current main study will be for adverse events such as allergy or rash," he said.

Dr Vijaya said the hospital was the first in the country to initiate the trial as it was the earliest to complete the groundwork and recruitment screening.

The clinical trials will be conducted in stages at eight other hospitals under the Health Ministry.

The Health Ministry had said the collaboration initiative between the government and the Chinese government through the Institute of Medical Biology Chinese Academy of Medical Sciences (IMBCAMS) serves to generate scientific evidence in the development of the SARS-CoV-2 vaccine.

It said the SARS-CoV-2 vaccine uses an inactive vaccine platform made from viruses that are killed through physical or chemical processes and do not have the potential to cause diseases.

The same phase 3 trials will also be carried out in Brazil. Phase 1 and 2 trials have been conducted in China.

A total of 3,000 volunteers across the country will be involved in the trial.

The volunteers would be given two doses over an interval of 14 days on the upper arm muscles and are required to attend six visits within two months, followed for 13 months. 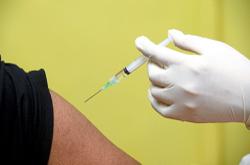 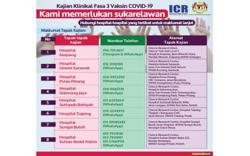