WASHINGTON: US military prosecutors have filed formal charges against an Indonesian extremist and two others in the 2002 Bali bombings and 2003 Jakarta attack, the Pentagon said.

The charges were filed nearly 18 years after they were captured in Thailand and after each had spent over 14 years in the US military prison in Guantanamo Bay, Cuba.

The first charged was Indonesian militant Riduan Isamuddin, better known as Hambali, the leader of

the Indonesian group Jemaah Islamiyah (JI) and believed to have been al-Qaeda’s top representative in the region.

The group, with support from al-Qaeda, carried out bombings of tourist nightclubs in Bali on Oct 12,2002, that killed 202 people, and the Aug 5,2003 attack on the JW Marriott hotel in Jakarta that left 12 dead and scores injured.

The other two charged, Malaysian nationals Mohammed Nazir Lep and Mohammed Farik Amin, were top Hambali aides in JI who had undergone training by al-Qaeda, according to Guantanamo case documents.

“The charges include conspiracy, murder, attempted murder, intentionally causing serious bodily injury, terrorism, attacking civilians, attacking civilian objects, destruction of property and accessory after the fact, all in violation of the law of war, ” the Pentagon said in a statement.It was not clear why, after years of delay, the charges before Guantanamo’s military tribunal were announced on Thursday.

In 2016, Hambali’s bid to be released from Guantanamo was rejected as prosecutors said he still represented a “significant threat to the security of the United States”.

When Biden was Barack Obama’s vice-president, they sought but failed to close the navy-run prison in Guantanamo and had remaining prisoners either released or tried in US civilian courts.

Obama’s successor, Donald Trump, showed no interest in Guantanamo and its inmates. — AFP 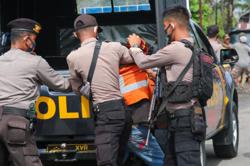