Knee-deep in floodwaters: Residents in Donggongon, Penampang making their way across the Sigar roundabout. Continuous rain since yesterday has made the area impassable to traffic. — Bernama

KOTA KINABALU: Sabahans who face floods every time it rains heavily are crying out for better mitigation initiatives instead of just help with food and other essentials from the government.

A villager from Kg Ramayah, who only wanted to be identified as Rita, said she had to deal with floods several times a year.

“This is not new. We have had so many governments. Why can’t someone really do something about these floods?” she asked.

Another villager, known as Bibi, said the government should talk to scientists and geological experts on how to mitigate floods in Sabah.

Sunita Rahman from the nearby village of Torikon is fed up with floods and how she and her family have to stay up the whole night whenever it rains continuously.

“Is there really no way for anyone, especially the government, to come up with feasible flood mitigation measures?” she said, appealing for help for those badly affected.

Christin B, who lives in Menggatal with her family, is busy moving her stuff to higher ground as the weather shows no sign of improvement.“We are still trying to move into our new place here. It is not even complete and now we have to deal with floods, ” she said.

Kapayan assemblywoman Jannie Lasimbang, whose family is one of those affected whenever the rainy season comes around, is asking that the government get on with flood mitigation efforts, including drainage and irrigation for Penampang.

“I hope the current government will not look away but speed up assistance for those affected, ” Jannie added. 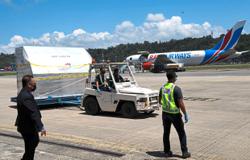