The facilities also do not have accommodation certificates from the Peninsular Malaysia Labour Department (JTK).

Its Legal and Enforcement Division director Zaini Yaakob said the conditions clearly flouted the provisions under the Workers' Minimum Standards of Housing and Amenities Act 1990 (Act 446).

‘’Indeed, our inspection showed congestions whereby a bedroom, which should only have two occupants, is shared by more than four workers,’’ he said after conducting inspections at both the workers quarters on Friday (Jan 15).

Zaini said all the six blocks at the two workers’ quarters were found to be clean and suitable for occupation.

However, some requirements were still absent such as beds and mattresses, while some beds were placed in the sitting rooms and not in the bedrooms.

As a result of the operation, JTK would open an investigation paper on the employer or centralised accommodation provider who failed to meet the provisions under the Act, he said.

He said the three-hour operation started at 3pm and was carried out based on public complaints on the congestion at the two facilities.

‘’Further investigation is still being carried out and discussions will be held with the employers to take steps to overcome the problem in the short term,’’ he added.

He said the three-hour integrated operation comprising JTK, police and several agencies including the International Trade and Industry Ministry and local authority were conducted at the workers’ quarters in Kampung Acheh, Setiawan. - Bernama 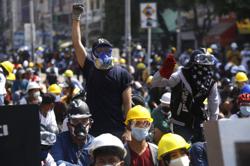