By JO TIMBUONG and RSN MURALI

PETALING JAYA: Many Malaysians are taking the second round of the movement control order in their stride as they agree that the restriction and the Emergency could effectively flatten the curve of Covid-19 infections in the country.

The move should not be seen as a “punishment” but as a way to protect the people from a health threat that could batter the economy, said sales and marketing manager Khairul Affendi Mohd Ali. Chan: ‘This is a crucial time for us. I am confident we will able to recover from this crisis with the measures embarked.’

“A rise in cases could directly or indirectly cripple our economy because the people won’t be able to be as productive if they are infected.

“The lack of productivity can affect the country’s wealth just as it needs the funds to treat those who have been infected, ” said Khairul, 49.

He said the surging cases, which have been in the four-digit range lately, are worrying, leading the Health Ministry to look for other ways to enhance the healthcare system to reduce the load.

If the MCO was not imposed, he said, the country would have witnessed a further increase in infections and little hope of reducing them significantly.

He also hailed the Emergency declaration by Yang di-Pertuan Agong Al-Sultan Abdullah Ri’ayatuddin Al-Mustafa Billah Shah as a wise move to prevent a repeat of the exponential rise in Covid-19 cases after an election.

“Before the Sabah state election, we managed to even have zero cases but after it was held, the numbers rose almost uncontrollably.

“It is a wise decision to put people’s health before politics, ” he said.

“I don’t think the Election Commission is ready for virtual elections just yet, ” he said.

He said an Emergency was the best step to ensure a stable leadership amid a pandemic.

“Stability is needed to ensure that policies drafted to battle this pandemic do not change.

“Constant changes to health policies, triggered by a change in leadership, could be detrimental to everyone, ” he added.

The Emergency, he said, could be declared over by Aug 1 or earlier when infection rates were brought under control.

Hafiz, 50, felt that the Emergency was a two-pronged approach to stabilise the political situation as well as direct all resources to focus on combating the pandemic.

“The public health system cannot afford to be overwhelmed, otherwise situations could worsen, like in Italy, for example.

“To fight this battle, we need stability in both the country’s political landscape as well as healthcare system, ” he said.

Boutique owner Zairil Zakaria, 36, said the MCO this time around is more lenient as more sectors are allowed to operate.

“I also believe the Emergency is very targeted in this fight against an invisible enemy (the coronavirus), ” he said.

Self-employed K. Sureshwaran said the latest MCO would enable him to spend more time with his family.

“Even though this MCO is less rigid than the first one, I believe we can still beat the pandemic again, ” he said.

A housewife who only wants to be known as Sukirtha said the MCO could reduce the risk of infection as people continued to stay home.

“It is easier this time as the government has listened to the people’s complaints and made some adjustments, ” said the 40-year-old. 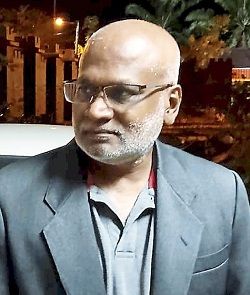 Rathakrisnan: ‘Someone must take drastic measures before Covid-19 turns into an even bigger nightmare for all of us.’

Business owner Simon Lim said it was better to have the MCO now than later as it was a necessary measure to bring down infections.

“Our healthcare system could definitely use a breather at this time, ” he said.

Lawyer Alvin Neo believes that under the Emergency, the country could make full use of all its assets in the healthcare system.

“With almost 70% beds being utilised at designated government hospitals, it will be good to have a contingency plan.

“Furthermore, I believe private hospitals are better equipped but under-utilised.

“With this, hopefully, patients will be treated faster and efficiently, ” he said.

Melaka businessman Edison Chan, 42, felt the Emergency declaration was a wise move as a way to combat Covid-19 “or we could be sorry later”.

As a Malaysian, he said that it was his hope that the infection curve would be flattened as soon as possible.

“This is a crucial time for us. I am confident we will able to recover from this crisis with the measures embarked, ” he said.

Chan said his business was impacted by the fresh round of MCO but he understood the rationale for such measures.

“Some may argue that it’s legally wrong to invoke the Emergency or to go for a second round of MCO. But we must look at the bigger picture. Someone must take drastic measures before Covid-19 turns into an even bigger nightmare for all of us, ” he said.

In his speech on the King’s declaration of emergency, Prime Minister Tan Sri Muhyiddin Yassin said several Emergency Ordinances may be promulgated, including the use of private hospital assets, temporary acquisition of land, buildings or private hospital movable assets or making requests to use private hospital resources to treat Covid-19 patients.

DG: Two weeks of MCO may not be enough to reduce cases

Sabah business community happy to be allowed to operate