He also said that the Parliament and state assemblies will not meet during the emergency proclamation period.

"The only thing that is stopping me from advising the Yang di-Pertuan Agong to dissolve Parliament and enable a general election to take place is the Covid-19 pandemic," said Muhyiddin in a live address on Tuesday (Jan 11).

Under normal circumstances, an election must be called 60 days once a seat is declared vacant, however the recent Sabah state elections saw a spike in Covid-19 infections in the country.

Muhyiddin said the decision not to have a general election during the pandemic is in line with the principle of saving lives.

He said it is also his responsibility as the head of the government to ensure that the safety of the Rakyat is taken care of.

"I want to give my strong commitment that the general election will be held, as soon as the special independent committee formed (in line with the King's announcement) has given assurance that the Covid-19 infection rate has reduced or recovered and it is safe to have a general election.

"At that time, it is up to the Rakyat to choose a government that they think is fit.

"This is a commitment and promise that I will fulfil" said Muhyiddin.

Muhyiddin made the live address following a proclamation of a state of Emergency by Yang di-Pertuan Agong Al-Sultan Abdullah Ri'ayatuddin Al-Mustafa Billah Shah on Tuesday.

The proclamation was made after a meeting with Prime Minister Tan Sri Muhyiddin Yassin on Monday (Jan 11).

Comptroller of the Royal Household of Istana Negara Datuk Ahmad Fadil Shamsuddin said in a statement on Tuesday that the Yang di-Pertuan Agong decreed that the emergency be in force up to Aug 1 or earlier if the number of Covid-19 cases can be effectively controlled and reduced.

Al-Sultan Abdullah also consented to a government proposal to set up an independent committee comprising government and opposition MPs as well as health experts to manage the Covid-19 situation, he said.

"This Independent Committee will make recommendations to His Majesty if it deems fit that the emergency can be withdrawn much earlier (than Aug 1), ” said Ahmad Fadil

On Monday, Muhyiddin announced that six states will be put under a movement control order starting Wednesday (Jan 13).

In his address on Monday, Muhyiddin said Johor, Melaka, Selangor, Penang, Sabah and the Federal Territories of Kuala Lumpur, Putrajaya and Labuan will be under an MCO until Jan 26.

Muhyiddin added that a recovery MCO will be imposed in Perlis and most of Sarawak.

He also said that three districts in Sarawak - Kuching, Miri and Sibu - as well as Pahang, Perak, Negri Sembilan, Kedah, Terengganu and Kelantan will be under conditional MCO. 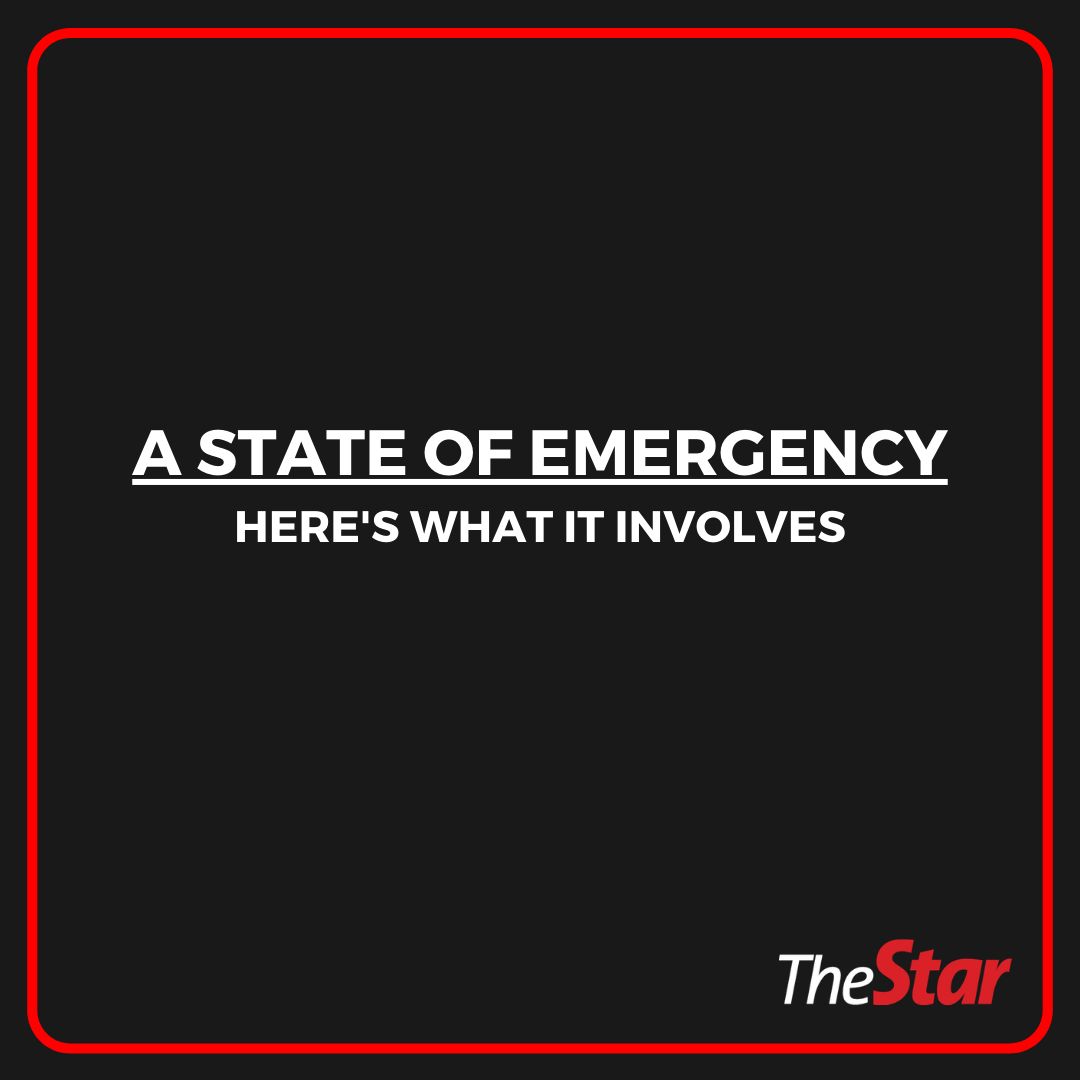 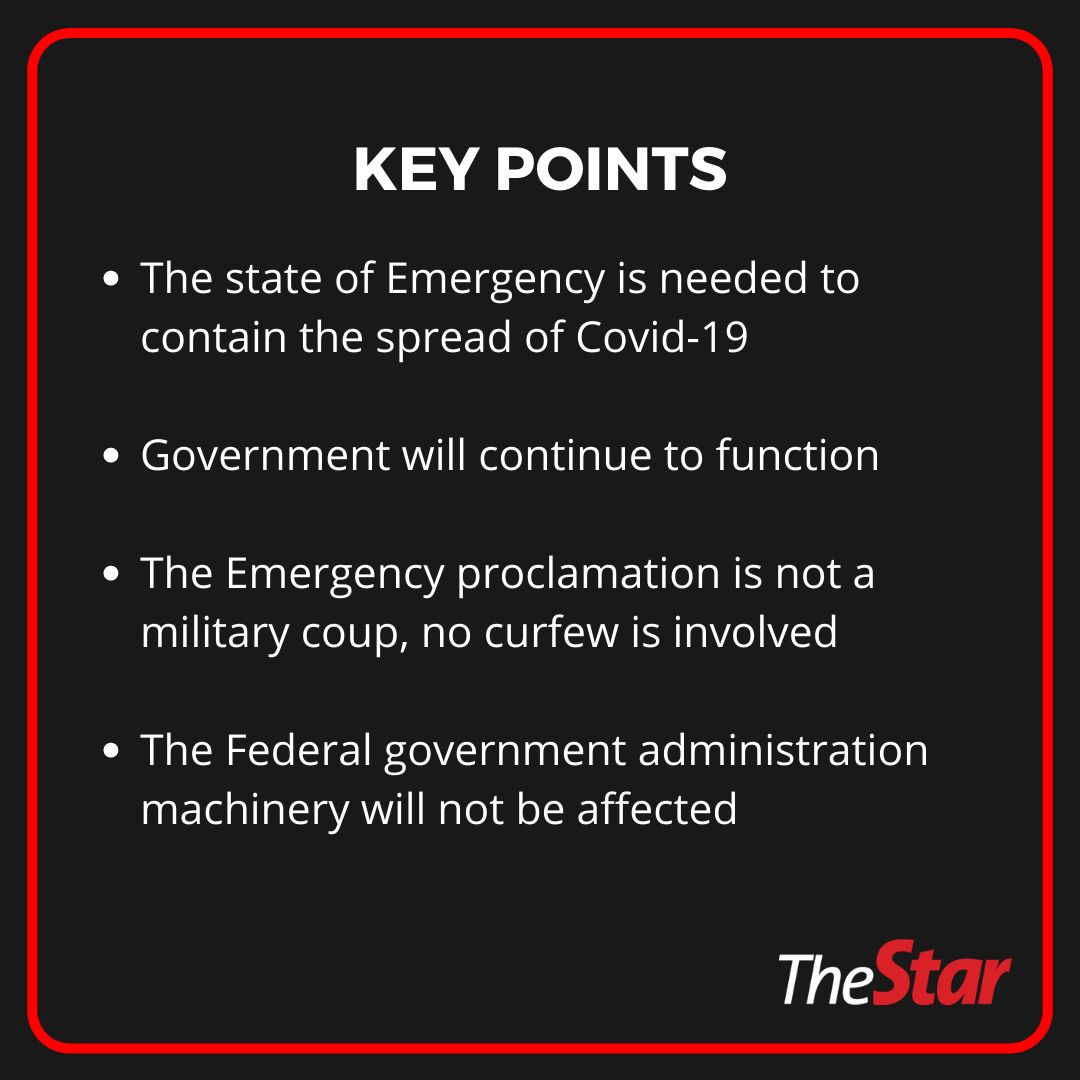 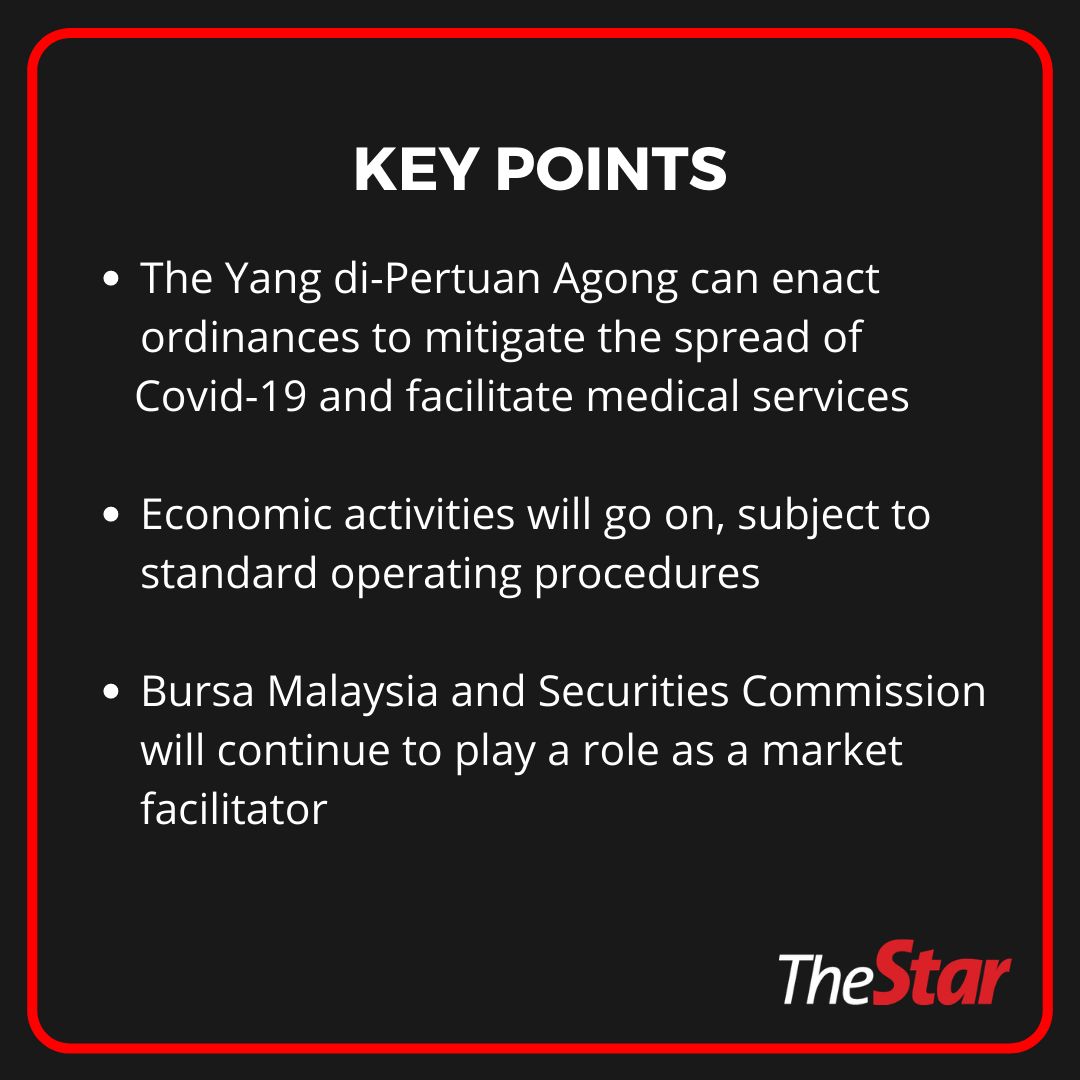 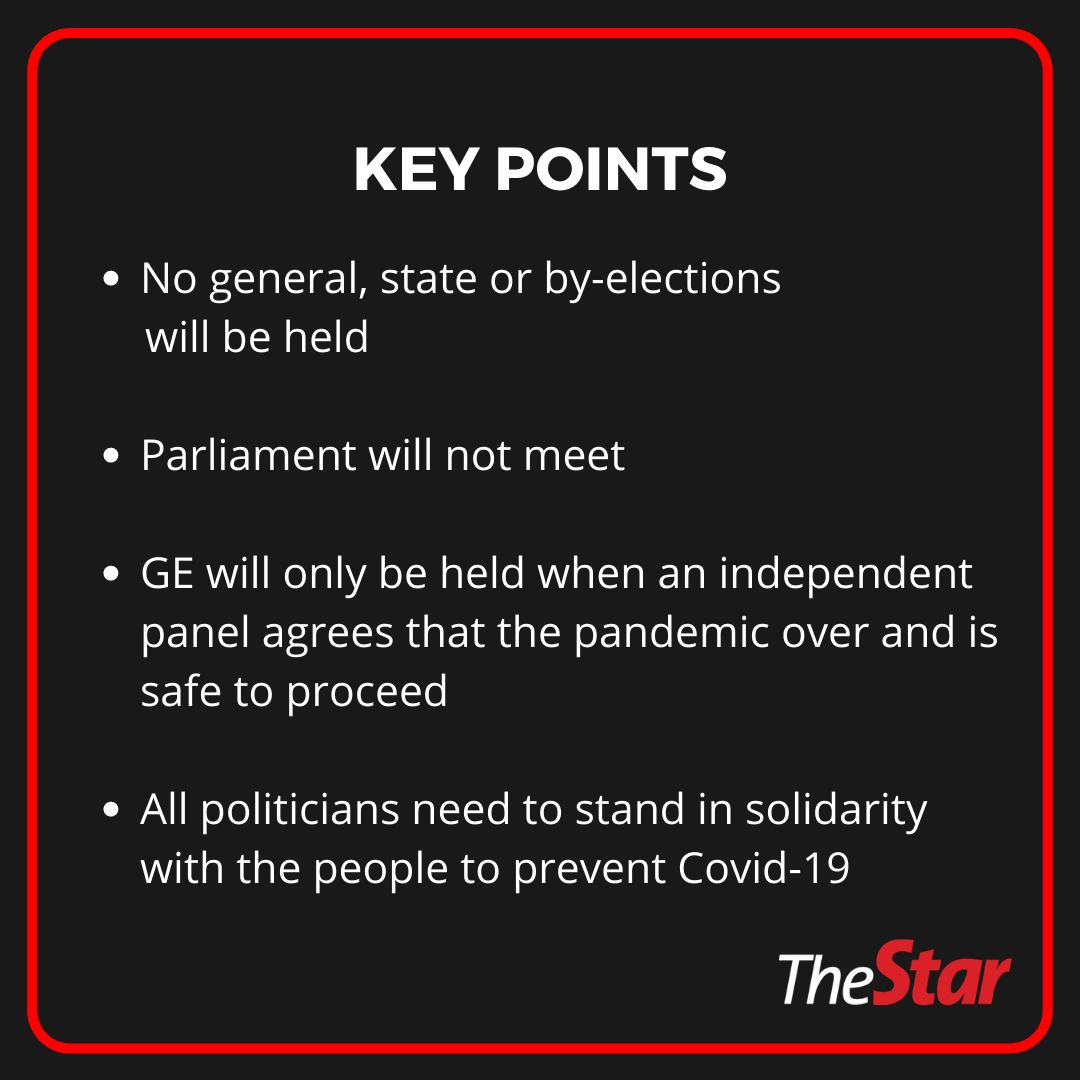 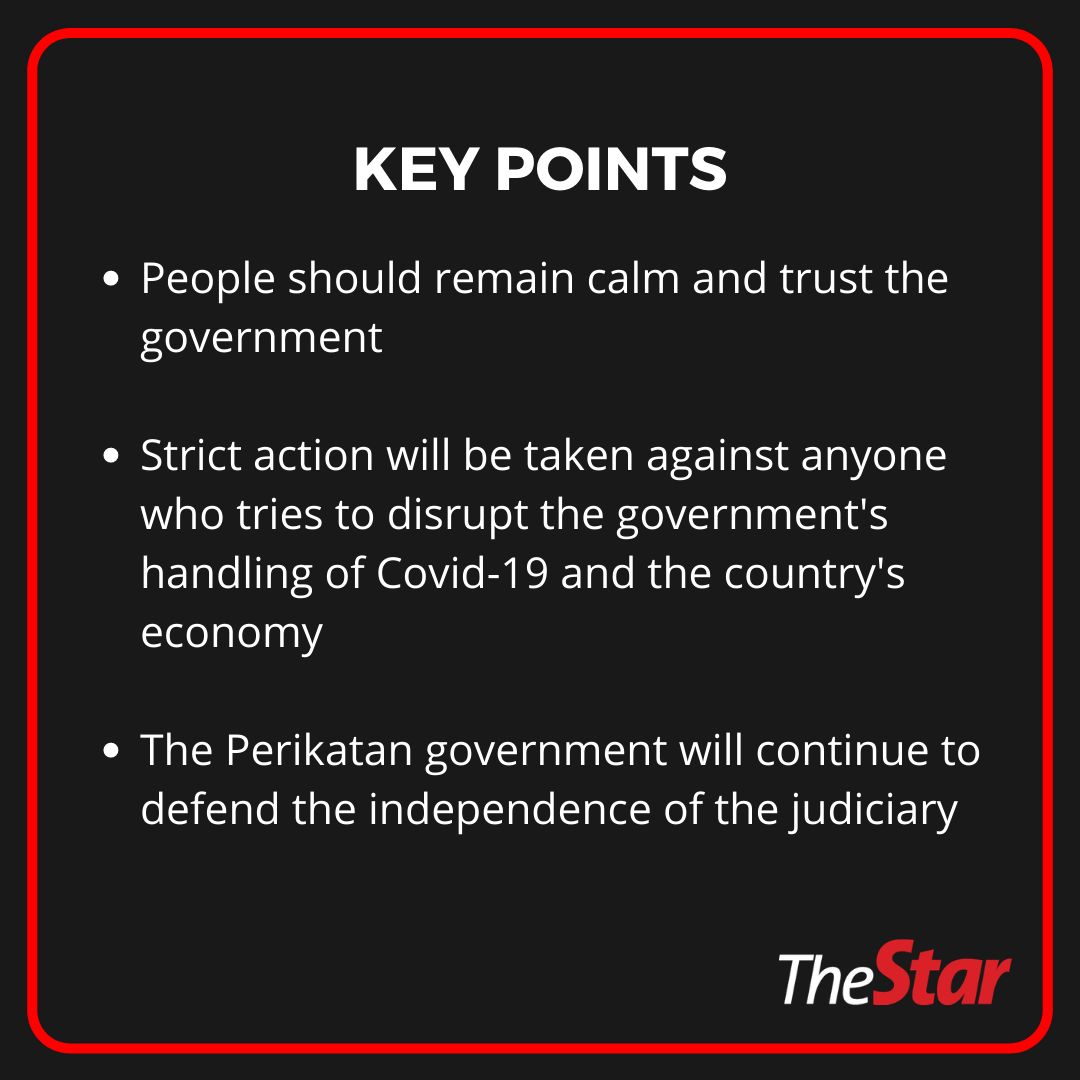 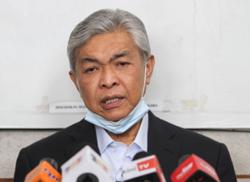