KUALA LUMPUR: A special online complaints portal should be introduced to tackle the issue of potholes throughout the country, says Khairy Jamaluddin.

The Science, Technology and Innovation Minister told Berita Harian that he would discuss this suggestion with the Works Ministry as soon as possible.

According to him, such a portal was important as it allowed the public to be the "eyes and ears" of the relevant agencies tasked with various aspects of road maintenance.

"Real time monitoring is important as I was told that only a few days ago, there was no pothole on the road where I had my accident.

"Agencies like the Public Works Department (JKR) do not have the manpower to constantly monitor all Federal roads," Khairy told Berita Harian on Monday (Dec 28).

On Sunday (Dec 27), he suffered injuries to his face after falling while cycling in Jalan Kampung Sri Cheeding, Banting, Selangor.

A cycling enthusiast, he landed in a ditch after his bicycle hit a pothole at about 11am.

Khairy confirmed the incident on his Twitter account by uploading a photo showing his bruised face and the location of the accident.

When asked about the incident, the Rembau MP could not go into detail as he told Berita Harian he was suffering from temporary memory loss after being warded in hospital Sunday.

"I uploaded the incident to Twitter as a reminder to road users to keep an eye out, but it also caught the attention of the JKR.

"I am thankful that JKR has taken prompt action but it should not just happen because I am a minister," he said.

Khairy added that he was aware of worse incidences, including where lives had been lost, due to potholes in the roads and he said the causes of the issue should be investigated.

"I have already discussed with (Works Minister) Datuk Seri Fadillah (Yusof) on how we can use technology to combat this issue.

"With a special complaints portal, details such as picture, videos and the location of damaged roads can be shared quickly," he told Berita Harian.

"What is important is that if there is a pothole, there should be no delays in fixing it.

"If we can see it, we can avoid it but I was cycling at a speed of 40kmh and did not manage to spot the pothole. What more motorcycle riders?" he asked.

The Rembau MP added that he took a positive view of online feedback asking him to have an accident in various areas so that immediate rectification work could be carried out.

"The root of the issue is that pothole need immediate attention as it is an issue close to the hearts of road users," he said.

Malaysians riled up over 'pothole situation' in the country

Khairy injured in fall while cycling 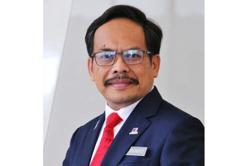