Apart from the headquarters in Kuala Lumpur, queues were also seen at EPF offices in many parts of the country.

Yesterday, EPF started to accept applications for i-Sinar, where an estimated eight million members were allowed to withdraw their savings to help them cope with hardship brought on by the Covid-19 pandemic. Payments will start from the middle of next month.

At the EPF office in Shah Alam, the line for the lunchtime crowd stretched over 100m as the applicants physically distanced and adhered to the SOP under the conditional movement control order.

Most came to get more information from the help desk as they were unsure about how to apply online.

Among those patiently waiting in line was a man who wished to be known only as Ahmad.

He said he lost his job and went to the EPF office in Nilai, Negri Sembilan but the crowd was too large.

“I can’t get a proper job as a technician. I came to Shah Alam hoping that I will be eligible for i-Sinar.

“I need my savings to survive as I have to send money to my family in Sabah, ” said the 38-year-old.

The i-Sinar application, available online only at iSinar.kwsp.gov.my, is open to Category 1 EPF members.

Category 1 are members who have not contributed to EPF for at least two consecutive months or are still working but have suffered a reduction of 30% or more in their base salary from March.

Eligible members under this category are those working in the formal sector or the gig economy, the self-employed as well as those who have lost their jobs, been given no-pay leave or housewives.

No supporting documents are required for the i-Sinar application as approval is automatic based on EPF’s internal data.

Members whose total income has been reduced by 30% will fall under Category 2. 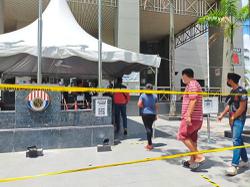