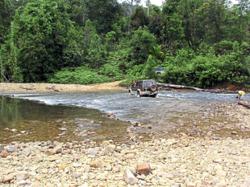 "The nomination of the Endau Rompin Johor National Park will, among others, enhance its image as an important conservation area in Johor and the second National Park in Peninsular Malaysia, strengthening management of the park based on 'best management practices' on par with the management of protected areas in the region and internationally.

"Apart from that, it also enhances the networking and cooperation of protected areas between the country and other countries, ” he said Saturday (Dec 12).

AHP is a regional cooperation initiative to manage the networking of protected areas in the Asean region which are unique, with biological diversity and important ecological values.

The matter was agreed by Asean member countries through the Asean Declaration on Heritage Parks and Reserves 1984 signed by Brunei Darussalam, Indonesia, Malaysia, the Philippines, Singapore and Thailand on Nov 29,1984.

According to the statement, the Ministry will submit the park’s nomination documents to the AHP Secretariat in the Philippines for consideration by Asean working groups as well as approval at the Asean Ministerial level in 2021.

He called on all state governments to also take the initiative to submit nominations for international recognition such as AHP as it can help in the promotion of the tourism sector, not only in Malaysia and in the Asean region, but also internationally.

"However, before the potential of ecotourism is aggressively explored, development and management of ecotourism areas must be implemented sustainably to ensure that the existing flora, fauna and ecosystem are always preserved," he added.

For that purpose, he said, a carrying capacity study should be implemented and the need for ecotourism operators to ensure the capacity limit is complied with.

He said the effort was also in line with Asean's intention for conservation measures to be implemented to maintain ecological processes and genetic diversity, ensure the preservation of biodiversity and ecosystems, as well as conserve forest areas that have high value in terms of culture, education, research, recreation and ecotourism. - Bernama