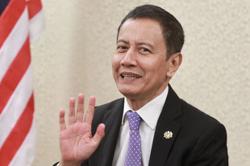 KUALA LUMPUR: Several Opposition MPs have filed a motion to refer Puncak Borneo MP to the Rights and Privileges Committee for allegedly showing the middle finger in the House.

Khoo Poay Tiong (PH-Kota Melaka) said he had filed a motion on Dec 2 to refer Willie Mongin under Standing Order 36(4) and 41(a) for the alleged gesture.

"I have also compiled the signatures of 23 MPs who witnessed Puncak Borneo (allegedly) showing his middle finger.

"I hope the Speaker can accept this evidence and take action," said Khoo at a press conference on Monday (Dec 7).

Maszlee, who was present at the press conference, said Mongin's actions were against the sanctity of the House and gives a bad example to the rakyat.

"Parliament is being watched by the rakyat, some of them are teenagers and children.

If he (Mongin) had admitted to his actions and apologised, then it's okay but when the Speaker asked, he denied it," said Maszlee.

Maszlee said 23 MPs witnessed the act, and he was one of them.

"I saw it with my eyes because I sit right opposite him so the Speaker should take action to ensure such incidents are not repeated in the House," said Maszlee.

"He should be referred to the Rights and Privileges Committee, some sort of disciplinary action should be taken," she said.

Last Wednesday (Dec 2), Dewan Rakyat Speaker Datuk Azhar Azizan Harun said he was unable to make a ruling on the allegations against Mongin, who is also the Deputy Plantation Industries and Commodities Minister.

Azhar explained that he is still unsure on the details, despite going through viral videos of the alleged incident.

The Speaker said he did not make an official ruling on the incident as he was unclear about the situation.

Azhar said those who are unhappy with the alleged actions by Mongin could write a motion to refer him to the Rights and Privileges Committee for him to defend himself.

On Tuesday (Dec 1), Parliament descended into chaos following Mongin's gesture towards Opposition MPs in the House after a bloc vote was called.

After bloc voting was called, MPs from both sides of the political divide started taunting each other before having their microphones muted.

Pakatan Harapan MPs could be heard chanting "pengkhianat" (traitor), while banging on their respective tables.

It was during then that Mongin allegedly showed the middle finger.

Several Opposition lawmakers demanded Mongin to apologise to the House.

Azhar had then asked Mongin if he showed the alleged gesture.

In response, Mongin denied that he showed the middle finger in the House, saying that MPs could have mislooked.