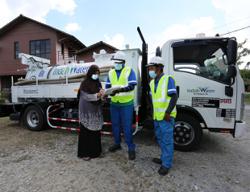 The IWK network team carrying out their duties, be it day or night.

IN a recent spate of river pollution in Selangor, the public paid the price when there were water disruptions, be it in domestic houses or commercial areas.

The latest allegation is yet another case in point, when IWK’s name was dragged through the mud when it had to fend off allegation of polluting Air Selangor’s water treatment plant in Taman Velox, Rawang on November 10.

The fact was that the sewage treatment plant (STP) was affected due to illegal waste discharge by irresponsible parties.

IWK’s chief executive officer Narendran Maniam said, the releasing of final effluent was halted since November 4, after IWK detected some element of illegal waste that was dumped into the sewerage system.

“The STP affected had to contain the flow for the past few days to avoid spillage into the waterways. If this was not executed promptly, the illegal element that came into our plant would have had created further detriment to the environment. Later on, we would read in the news that the next attack on the company would come in the form of prompt notification – one which IWK had already done the same day it found illegal wastewater in its STP.

To that, IWK thanks the National Water Services Commission (SPAN) who was quick to act on it, and together with IWK, they went on a patrol on November 5 and an investigation conducted found two premises near the plant that were suspected of releasing cosmetic white liquid, while the red liquid was believed to be used in coloured paper printing.

In several news reports last week, IWK was reported as among the companies found to be polluting water resources in the state and IWK had pleaded guilty to the offence under Section 25(1) of the Environmental Quality Act.

However, this case, which was an isolated predicament, was clearly taken out of context.

The fact of the matter was that in September 2019, there was an interruption to the flow of wastewater in IWK’s sewer pipeline when it was damaged by a third-party contractor who was conducting underground utility installation works.

In response to that, IWK had no choice but immediately activate a temporary emergency bypass pipe to avoid overflowing that would inconvenience the public.

IWK had also informed the Department of Environment about the matter and ensured that all related stakeholders were aware of the situation.

“Taken out of context, it would seem as though IWK is polluting, when in actual fact IWK is doing its level best to protect and preserve the environment particularly our water source, ” Narendran added.

Further to that, Narendran expresses his disappointment over the untrue accusations on polluting the waterways, as the irresponsible parties had in one way or another dumped the wastes illegally into the sewerage system or into the waterways.

“IWK had been taking the fall for many incidents because we are an easy target. It’s time to stop blaming us. What is more disappointing is how memory quickly fails as seen during the movement control order (MCO).

“During these period, the water and air were reported with better quality – in a situation when IWK was fully operational and discharging treated effluent into waterways, ” said Narendran.

In all these plants, IWK’s operations need to comply with standards set by the regulators and authorities.

As of September 2020, IWK’s level of compliance with the Environmental Quality (Sewage) Regulation stood at 97.1%, which is higher than the compliance level of 96% in 2019.

While IWK has faced issues with higher compliance requirement and inquiries from customers at times, IWK is able to resolve them within the stipulated level of service (LOS) requirement set by the National Water Services Commission (SPAN).

Narendran said the stringent adherence to the standards can easily be undone by irresponsible actions of culprits who dispose of wastes illegally into the public sewers.

More importantly, there are other sources of pollution in Selangor which may come from individual septic tanks (IST), communal septic tanks (CST) and pour flush that are not properly maintained.

“Based from the information that we have gathered, there are approximately 97,894 ISTs, CSTs and pour flush within the water catchment area in Selangor. Of this number only an average of 3.5% properly maintained and desludged their tanks, ” he added.

At the same time, there are also certain sewerage systems in Selangor that have not been handed over to IWK for maintenance, but are operated by private parties.

On the other hand, when IWK was mandated to maintain and operate the national sewerage system, Selangor recorded a significant improvement with a level of compliance at 97%.

Selangor records far better sewerage connectivity of 90%, compared to 83% about 10 years ago.

This is mainly attributed to IWK’s role in providing efficient planning advice for sewerage system and services whereby more than RM3bil have been invested for new, upgrades and improvements of public sewerage system in Selangor by the Federal Government in the last two Malaysia Plans (2006-2015), as well as the ongoing 11th Malaysia Plan (2016-2020).

Selangor has some of the best state-of-the-art and modern sewerage system in the country that not only meets stringent effluent quality standards, but are also neighbourhood friendly with its architecture that assimilates with the local environment and ambience.

The sewerage infrastructure development undertaken is required to ensure that the people in Selangor and nationwide have access to high standards of public sanitation.

In addition, SPAN has approved a budget of RM142.8mil to upgrade 644 sewage treatment plants that will see increased quality of effluent discharge from these plants.

As the delivery of the plant upgrades are done in phases, this welcoming approval defines the effort by the regulators and IWK to preserve the environment.

This can be easily undone by criminal acts that should be punished and the perpetrators brought to justice for polluting raw water supply that is crucial to basic human needs.

Therefore, IWK seeks once more for the public and related authorities to hold those responsible accountable, instead of the entity that is actually doing its level best to preserve the environment.