Parents and students appeal to ministry to lock down SPM dates 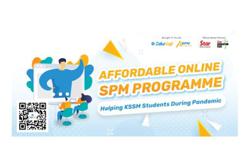 PETALING JAYA: Let there be no more changes to the Sijil Pelajaran Malaysia (SPM) examination dates, parents and students appealed.

On Wednesday, The Star front-paged students’ jitters from an exam year of erratic classes and online lessons.

After much uncertainty over the exams due to the recent spike in Covid-19 cases, Education Minister Dr Mohd Radzi Md Jidin finally put the matter to rest after announcing that the exams have been pushed to Feb 22 next year.

SPM exam is normally held in November and December.However, it was rescheduled to start on Jan 6 next year because of the Covid-19 pandemic.

Melaka Action Group for Parents in Education chairman Mak Chee Kin said the ministry must be firm on the dates.

“As it is, these changes are causing anxiety and stress among students and parents.

“Make firm decisions on the dates and have a comprehensive plan B if the conditional movement control order (MCO) continues. Stop being firefighters.

“Come up with safety measures as well to ensure that the SPM exam is conducted smoothly and fairly,” he added.

“Children are dropping out of schools and stress levels are rising with the postponement of the SPM again.

“How sure are we that it will not be rescheduled again?

“Prolonging the problem isn’t going to solve the issue; ensuring the implementation of the strict standard operating procedure will,” she said.

The National Union of the Teaching Profession (NUTP) secretary-general Harry Tan said while it would like for matters to be certain regarding SPM exam dates, students’ safety comes first.

“However, we hope the ministry will address issues raised by parents, students and teachers quicker and not take too long to respond,” he added.

Form Five students are feeling a mix of emotions.

SMK (P) Jalan Ipoh student Harishna Kajentharan, 17, described the postponement as “devastating” as it would affect her enrolment into college.

“A lot of my time is going to be wasted but I’m trying to stay optimistic and hope for the best during this Covid-19 pandemic,” Harishna said.

Another Form Five student who wants to be known as Han from SMK (P) Methodist Ipoh, is annoyed that yet again, the exams have been postponed.

But it must be done, she admitted, considering the spike in cases.

“My Chinese New Year celebrations next year will be filled with modules and worksheets, so I feel sad thinking about that,” she said.

Similarly, a student in Melaka who only wants to be known as Wong from SMK Munshi Abdullah, said the news was unexpected.

“I just have to stay strong and keep my momentum to study going in order to prepare for my SPM exam.

“I hope the date will not be postponed again as it will affect my momentum. I want to move on to the next phase of my life,” said the 17-year-old.

Another student who only wants to be known as Ainun, said she wasn’t surprised by the announcement.

The SMK Bukit Bandaraya student will use the time to prepare better for her exams.

Separately, Mohd Radzi said the SPM trials, which have been postponed due to the conditional MCO in some states, would also be rescheduled. 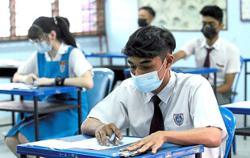