PETALING JAYA: Datuk Seri Najib Razak (pic) has come to the defence of his fellow former premier Tun Dr Mahathir Mohamad over a controversial tweet, saying everyone should read the latter’s statement in full.

“The world should calm down and read @chedetofficial’s statement in its full context.

"I’m sure he didn’t mean exactly what he said.

“And even if he did, it’s his personal opinion, not Malaysia’s, ” he tweeted on Friday (Oct 30), also tagging Dr Mahathir’s handle.

However, Najib agreed that Dr Mahathir’s social media accounts should be taken away from him before he does “more damage”.

“If not, Twitter would be an accomplice to murder, ” he tweeted.

Earlier Thursday, Twitter removed one of Dr Mahathir’s tweets which was part of a long thread, initially marking it as “glorifying violence".

Dr Mahathir had tweeted that “Muslims have a right to be angry and to kill millions of French people for the massacres of the past”, adding that Muslims, however, have not taken vengeance in this way.

His posts came just a few hours after a knife attack at the Notre-Dame basilica in Nice, France where three people were killed and others injured.

He also posted the full thread on his blog.

“But by and large, the Muslims have not applied the ‘eye for an eye’ law. Muslims don’t. The French shouldn’t.

“Instead the French should teach their people to respect other people’s feelings.

“Since you have blamed all Muslims and the Muslims’ religion for what was done by one angry person, the Muslims have a right to punish the French.

“The boycott cannot compensate the wrongs committed by the French all these years, ” he added in his writing, which was directed at French President Emmanuel Macron. 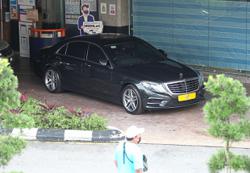 Taking health matters to heart
Johor polls: Umno will help MCA win back Johor Jaya, says Khaled Nordin
Usher in the Year of the Tiger with auspicious feng shui
Man found dead with hands, feet bound in Tampin
Three killed, four injured in Lipis road crash
Hailstorm damages 40 houses in Kampung Kebun Bunga
As we welcome the Year of the Tiger, let’s take a peek into the art of Chinese red paper-cutting
Major push to increase road safety
On upward trend with 5,439 new cases
400,000 children sign up to get vaccinated