On the right track: Lee (right) said the hospital will remain a sustainable venture and be able to help more poor patients.

SEREMBAN: An 88-year-old maternity hospital set up by Chinese philanthropists to primarily serve poor immigrants will undergo a restructuring exercise to ensure it remains a sustainable venture and can continue to provide quality medical treatment to the underprivileged.

NSCMH Medical Centre president Datuk Lee Tian Hock said the restructuring was to ensure the hospital, which was in debt and faced closure seven years ago, would continue to be run professionally.

“The hospital didn’t adapt fast enough to changes since it opened in 1932.

“And after helming it for almost seven years now, I am confident that the hospital has a great future but we need to restructure to ensure it remains a success story.

“This is necessary as I do not want the hospital to face the same problems it did previously, ” he told reporters after a meeting with the hospital management committee.

Initially known as the Negri Sembilan Chinese Maternity Hospital, it was renamed NSCMH Medical Centre a few years ago.

After Lee’s team took over, it continued to register a deficit for two years before it started registering exponential growth in the last two.

Lee, a property developer, had also gradually advanced RM17.1mil of his money to help revive the hospital, which had only 32 beds then.

Under the restructuring, the hospital’s assets such as the buildings and land will continue to remain with the Negri Sembilan Chinese Maternity Association (NSCMA).

“Under the corporatisation exercise, we will set up CMH Holdings Sdn Bhd which will have a wholly-owned subsidiary to be known as CMH Healthcare.

“Once this is done, NSCMA will transfer the business to CMH Healthcare and be paid RM300,000 in lease every month for the properties, ” he explained.

Lee said NSCMA would be able to use the income to continue to subsidise dialysis treatment as well as provide financial assistance to poor patients.

The hospital provides treatment to some 580 patients.

“This way, the poor will not have to ask for donations from others, ” he said, adding that the exercise could only be carried out once it was endorsed at the extraordinary general meeting expected to be called in December.

“We hope the entire exercise can be completed by the middle of next year.

“After that, we will aim to have the hospital listed in three years, ” he said, adding that the hospital had also obtained approval from the authorities to be renamed CMH Specialist Hospital.

Lee said he was confident that the hospital, which is on track to register a revenue of some RM75mil this year, would breach the RM100mil mark in two to three years.

Lee said the management would also consider opening up satellite hospitals if it had the right investors.

The hospital has 18 resident and 27 visiting consultants across a wide range of medical disciplines. 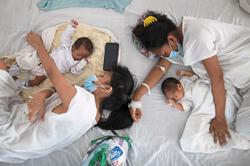