PETALING JAYA: Two crucial meetings will be held this week to cool down the political temperature in the country.

Amid the heated relationship between Umno and Parti Pribumi Bersatu Malaysia, Muafakat Nasional will hold a meeting today to discuss the future of the two parties in the alliance.

Umno will then hold a supreme council meeting in Pahang tomorrow.

Among the issues that will be discussed are Umno’s cooperation with Perikatan Nasional and PKR president Datuk Seri Anwar Ibrahim’s alleged claim of support from Umno MPs.

It is understood that negotiations are still ongoing between the three Muafakat partners – Umno, Bersatu and PAS – on the exact form of cooperation that will be undertaken between them.

Muafakat joint secretary-general Tan Sri Annuar Musa of Umno admitted that efforts to unite and form any political alliance was not easy but remained confident that this could be achieved.

“We need to continue to negotiate and with full of patience so the Malay Muslims can remain strong,” he said in a statement yesterday.

Asyraf said the top party leaders gave their blessing to continue with the cooperation despite attempts by certain parties who are trying to split the cooperation.

“We will remain the backbone of the Malays and Islam in the country,” he said.

According to sources, the three party presidents and secretaries-general met on Saturday night to discuss the latest political developments.

He hoped that Muakafat would strengthened its cooperation as it was the strength and pillar of Islam and the Malay community.

“It is important (to cooperate) as it is for the strength of the community,” he said.

PAS Mursyidul Am (spiritual leader) Datuk Hashim Jasin told Harakah that the Islamist party chose to strengthen Muafakat with Umno and at the same time support the Perikatan government.

“Actually this is not an issue. PAS has its own ways to handle the current situation,” he said.

He urged both parties to exercise caution and try to make sacrifices for the betterment of the country.

Several other top leaders who spoke under the condition of anonymity said they did not want to cooperate with Opposition leader Anwar or DAP. 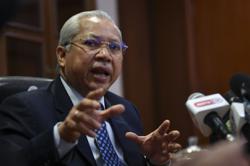