KUALA LUMPUR: A former political secretary to an ex-defence minister has claimed trial at the Sessions Court here to five counts of graft involving more than RM6.3mil.

Mohd Azhar Che Mat Dali, 49, allegedly solicited and received the sum as bribery for a contract tied to the ministry.

The father of seven pleaded not guilty after the charges were read out to him before Sessions Court judge Azura Alwi here yesterday.

At the time of the alleged offences, Mohd Azhar was still the political secretary to Mohamad Sabu, who was the defence minister then.

Mohamad Sabu, who is president of Parti Amanah Negara, is better known as Mat Sabu.

According to the first charge, he allegedly solicited RM5mil from one Elias Jemadi Tajudin, a managing director at FEHM Entity Sdn Bhd, as a reward to assist FEHM Entity to be chosen as the strategic partner and contractor for maintenance of the ministry’s intelligence system.

He allegedly committed the offence at a boutique hotel in Jalan Ampang on July 22 last year.

The offences were allegedly committed in Putrajaya and Kuala Lumpur – including the parking lot of the defence minister’s residence at Jalan Bellamy between September last year and February this year.

The charges were framed under Section 16(a)(B) of the Malaysian Anti-Corruption Commission (MACC) Act 2009 and the accused faces up to 20 years imprisonment and fine of no less than five times the amount of gratification or RM10,000, whichever is higher, if convicted. Deputy Public Prosecutor Mahadi Abdul Jumaat from the MACC proposed RM500,000 bail for all five charges.

“RM500,000 is not an excessive bail amount as the amount involved was RM6.3mil. And the accused does not have the right to automatic bail, ” he said.

Azhar’s lawyer Ariff Azami Hussein pleaded for minimum bail on grounds that his client had been unemployed since the first movement control order (MCO) in March.

He said Azhar was not a flight risk and had given full cooperation to the authorities.

“He would not abscond as he lives with his family and has two school-going children. He could only raise RM30,000 for bail as he was informed about the charging on Wednesday, ” Ariff said.

Judge Azura then fixed bail at RM300,000 in two sureties. 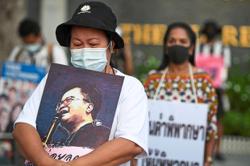