PETALING JAYA: The National Security Council has reviewed its earlier decision of limiting only two-diners per table to a maximum of four in areas under the conditional movement control order (MCO), says Datuk Seri Ismail Sabri Yaakob (pic).

The announcement by the Senior Minister comes a day after the start of the two-week conditional MCO in Selangor, Kuala Lumpur and Putrajaya on Wednesday (Oct 14).

"Dining in restaurants are allowed subject to the standard operation procedure and is limited to two individuals per table but if the table is big, up to a maximum of four individuals are allowed per table," he said during his daily Covid-19 briefing Thursday (Oct 15).

He said the current conditions were similar to that used during the conditional MCO in May which was subsequently relaxed in June under the recovery MCO period.

"We allowed dine-in during the previous conditional MCO but limited it to two to a maximum of four individuals per table.

"But under the recovery MCO period, we allowed tables to be joined together and for big tables to allow three to eight individuals to dine together as long as there was physical distancing between them in the restaurants," he said.

The clarification comes in the wake of confusion among restaurants and eatery operators following uncertainty over the size of tables for the condition to be applicable or whether two s or more diners were allowed for big or long tables.

Labuan to be under conditional MCO from Oct 17-30, says Ismail Sabri

Covid-19: Employers urged to allow staff from red zones to work from home 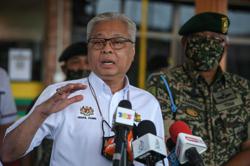