Seri Alam OCPD Supt Ismail Dollah said the group made their victims believe that by paying RM250 to a company registered under one of the suspects, they could get a job on a cruise ship anchored at the Pasir Gudang Ferry Terminal.

"They convinced about 30 victims that the jobs were available starting Sept 15.

"We arrested the suspects, in their 30s, while they were in the middle of conducting an interview at a shipping centre in Plentong, here on Tuesday (Sept 8)," he said in a statement.

"According to the Pasir Gudang Ferry Terminal, there were no such jobs being offered on any of the ships at the terminal for the time being.

"The public, especially job seekers, are reminded to be careful as no activities onboard cruise ships are allowed throughout the recovery movement control order (MCO) period at any ferry terminals or ports," he said.

Supt Ismail said the case was being investigated under Section 420 of the Penal Code for cheating.

He also urged other victims of the case to come forward and assist in police investigations. CDC extends no sail order for cruise ship through September 2020 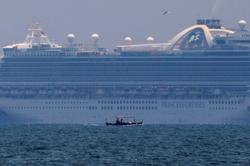