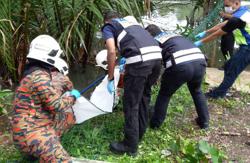 KUALA LUMPUR: Tears streamed down the face of a 19-year-old as he was convicted for the murder of 21 students and two teachers who died in a fire at Pusat Tahfiz Darul Quran Ittifaqiyah about three years ago.

The teenager, who was 16 at the time of the offence and cannot be named due to his age, started tearing up as High Court judge Justice Azman Abdullah delivered the decision here yesterday.

In his findings, Justice Azman said the fire was caused by petrol and gas cylinders.

Justice Azman said there were also testimonies that the main door nearest to the victims had been shut while another door had been walled up and converted into the supervisor’s room.

This had caused only one exit during emergencies and trapping the victims inside.

“The defence was merely a denial and failed to raise reasonable doubt.

“I find the offender had committed the murders with intent whereby the prosecution had proven its case beyond a reasonable doubt,” Justice Azman said.

Lawyer Mohd Haijan Omar, who represented the young offender, told the court that his client’s father had passed away while he was in detention during the trial while his mother had a small-scale online clothing business and earned RM2,000 a month.

“I have been informed that my client is taking classes in prison and will be sitting for the SPM on his own initiative.

“He apologises to everyone involved,” Haijan said.

Due to the offender’s age, the court ordered for him to remain in prison at the pleasure of the Yang di-Pertuan Agong in accordance with Section 97(1) of the Child Act 2001.

Under normal circumstances, convictions under Section 302 of the Penal Code carry a mandatory death sentence.

“I pray for the deceased persons to be granted entry to heaven,” Justice Azman said before adjourning the proceedings.

Haijan later informed the press that the defence would be appealing the decision.

According to the amended charge, the teenager, together with another unidentified individual, allegedly murdered the 23 people at the tahfiz centre in Jalan Keramat Hujung, Kampung Datuk Keramat, Wangsa Maju, here, between 4.15am and 6.45am on Sept 14, 2017.

A total of 71 witnesses testified at the prosecution’s stage which began on May 30, 2018.

Among them was Putrajaya Fire and Rescue Department director (fire safety division) Edwin Galan Teruki, who told the court that valves of two gas cylinders found at the scene of the fire had been punctured.

Another witness, a science officer at the Fire Investigation Laboratory, Kuala Lumpur Fire and Rescue Department, Yusnita Osman, said traces of petrol were found on samples from the building where the fire broke out.

In his defence, the teenager denied being in the tahfiz’s compound at any time during the commission of the offence.