KOTA KINABALU: Former chief minister Tan Sri Musa Aman feels betrayed a second time as the state assembly was dissolved amid an attempt by him to form a government with a simple majority.

“This is the second time I felt betrayed.

“The first time I had already formed the government and was fired even after I was sworn in as chief minister.

“Now, I have 33 assemblymen to form the state government, ” he said at a press conference at 2.30pm yesterday, a few hours after Yang di-Pertua Negeri Tun Juhar Mahiruddin consented to the dissolution of the assembly requested

Musa, who kept calm but occasionally showed his irritation, said the dissolution of the assembly was not totally unexpected.

However, he said he could appeal to the governor to reconsider the decision to dissolve the assembly in view of the fact that he had the majority of the assemblymen and holding an election during the current Covid-19 pandemic was not good, especially for the people.

“We still have three years to go till the end of the term of the assembly. It is not necessary for an election now, ” he added.

He said he would ask his lawyers to study the legal aspects of the dissolution.

Musa said assemblymen from Shafie’s Parti Warisan Sabah and its coalition partners decided to follow him to lead the state as the Warisan government was weak and was not in line with the Federal Government.

He said these elected representatives were not lured by any money or promises of position but came on their own accord.

“I have 33 YBs who have signed statutory declarations.

“I have through my lawyers handed them to the TYT this morning, ” the Sungai Sibuga assemblyman said with the 32 assemblymen seated behind him.

“We can rule the state. There must be close cooperation between the state and federal governments.”

On whether they were prepared for snap elections, he replied: “Yes we are prepared. But is it necessary for elections now? There are three more years for the term to end.”

Musa, the sole Umno assemblyman, teamed up with Sabah Bersatu (nine assemblymen), Parti Bersatu Sabah (four), Sabah STAR (three) and three Independents in a bid to topple Shafie’s government which was sitting on a comfortable 45-seat majority in the 65-member house.

A total of 13 assemblymen from Warisan, Upko, Sabah PKR and Sabah DAP crossed over to support Musa, leaving Shafie’s bloc with 32 seats in the state assembly.

Most of the 13 were former members of Barisan Nasional and Sabah Umno who had crossed over to the Warisan coalition government.

Only three were originally from Sabah PKR and Sabah DAP.

After the press conference, the 33 assemblymen, including Musa, were stopped by police from entering the road leading to Istana Negeri.

A spokesman said the assemblymen were not allowed to pass through the police roadblock set up along Jalan Istana at the Bukit Nenas roundabout at Signal Hill in Karamunsing here.

Arriving in the area in at least 10 vehicles, they were told they could not proceed.

Musa has not been able to meet Juhar since he announced that he had garnered majority support in the state assembly.

The majority of the assemblymen have been staying at Musa’s house since Wednesday, waiting to go to the Istana. 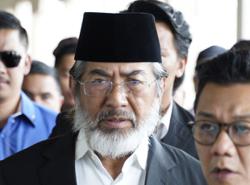 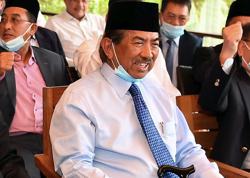