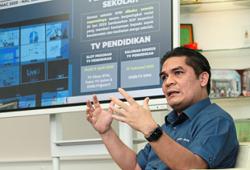 Cheah’s immediate goal is for Sunway University to number among the global top 100 institutions in the coming decade.

WHILE progress has been steady, Tan Sri Dr Jeffrey Cheah believes that there is still a long way to go before realising his dream of establishing Sunway University as ‘the Harvard or Cambridge of the East’.

“I am aware this is unlikely to be realised in my lifetime, but what I am doing is setting the foundation stones to realise my aspirations for the future. Slowly, but surely, we will get there, ” he opined.

The immediate milestone he is eyeing is for the university to number among the global top 100 institutions in the coming decade, but that’s not all. Cheah is also actively advocating to empower private universities to operate via the university endowment model.

Endowment funds, sourced from donations and then invested for returns, enable universities to operate in perpetuity by helping maintain academic excellence, advance research and development, cover operating expenses and wages, as well as provide financial aid for deserving students among others. 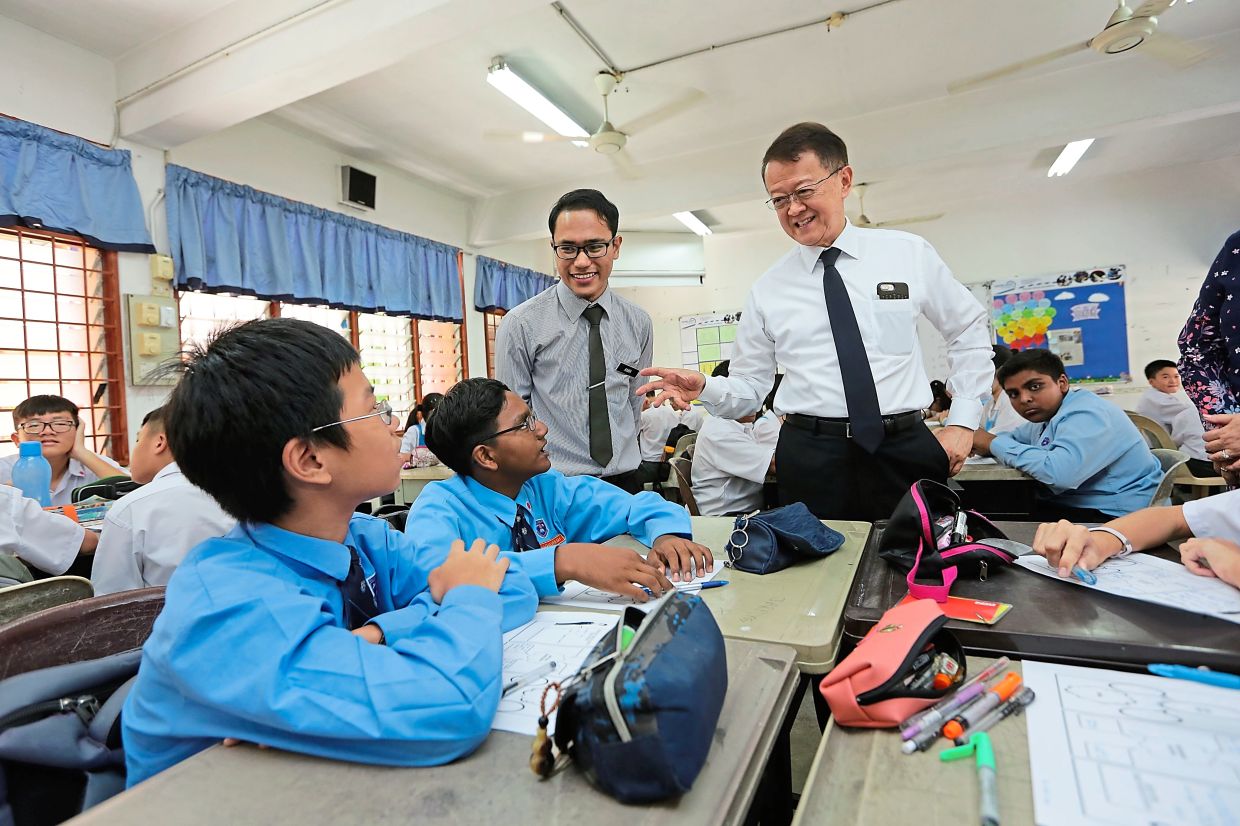 Cheah (standing, right) believes that education is the best way to combat poverty.

Some may say that it is a pipe dream, but the same was said for Sunway City Kuala Lumpur. Similarly, it had its share of naysayers that - as Cheah recalled - labelled him ‘crazy’ for buying a piece of barren wasteland ‘full of holes’ located in Sungai Way in 1986 with the intention of rehabilitating it into a sustainable and vibrant township.

Towards this goal, Sunway recently partnered with Celcom and Huawei in a tripartite collaboration towards advancing smart township solutions encompassing the Internet of Things and artificial intelligence with fifth-generation (5G) connectivity. The Memorandum of Understanding aims to explore the potential for Celcom and Huawei to be the 5G technology enabler for Sunway Group, while Sunway City KL will be the ‘launch pad’ for the groundbreaking partnership.

Striving for the best

The journey of Sunway University thus far is marked by tremendous growth. According to the QS World University Rankings by Subject 2020, Sunway University - despite its relative youth - ranks among the top 500 universities in the world for its business and management studies discipline.

Such recognition reflects the strength of the academic institution’s reputation.

When Cheah started the education institution in 1987, then known as Sunway College, it was hard to imagine that a Malaysian academic institution could compete with the best universities globally.

But it has certainly made its mark, pushing the envelope in education through the years. For instance, it was a pioneer of the twinning programme concept. At the time, the country was in recession and parents could not afford higher education for their children overseas, which was when Cheah came up with the concept.

Cheah also set up the education-focused not-for-profit Jeffrey Cheah Foundation (JCF), to which he transferred the equity and rights of Sunway Education Group’s (SEG) educational institutions worth several billion ringgit into the foundation in perpetuity. Being able to gain the recognition of renowned institutions such as Oxford is proof of Sunway University’s quality, says Cheah (right).

The foundation owns and governs all 16 educational institutions and entities under the SEG, including Sunway University and has awarded more than RM482mil in scholarships and grants to date. It is Cheah’s personal goal to award more than RM1bil in his lifetime.

He said, “What we want to do is provide a helping hand rather than hand-outs and I believe the best way to do so is through education.

“JCF has come a long way since it was established 10 years ago. And I believe its structure of managing SEG’s operation surpluses and administering it into scholarships and grants will further benefit the education and sustainability sphere towards nation building.”

Today, it has active partnerships with prestigious academic institutions such as the University of Cambridge, Harvard University, the University of Oxford and the Massachusetts Institute of Technology among others, which are certainly not easy feats by any measure.

It has also sealed collaborative partnerships with Cambridge in the form of the Jeffrey Cheah Biomedical Centre, which is considered the centrepiece of the largest biotechnology cluster outside the United States, as well as the Sunway-Cambridge joint Clinical Research Centre that will serve as Cambridge’s regional site partner, the first such venture of its kind for Cambridge.

“Sunway University is relatively young, but to be able to gain the recognition and to collaborate with these renowned institutions itself speaks volumes on our quality and dedication, ” he opined.

Aside from working with the best academic institutions in the world, another instance that demonstrates Cheah’s conviction in learning from the best is the appointment of the Jeffrey Cheah distinguished professors.

He explained, “These professors are very accomplished in their own fields and they do not easily lend their name to any institutions. For them to be affiliated with Sunway University shows how much trust and confidence they have in us and our not-for-profit model.”

As JCF celebrates its 10th anniversary, it is a proud moment for Cheah, who stuck to his goal to provide quality education to students despite the fact that it was loss-making for 12 years.

The reason for this tenacity can be traced back to Cheah’s formative years in Pusing, Perak, where he witnessed first-hand the impact of poverty on families and how it closed off avenues for advancement for children.

“Education is particularly close to my heart. Very early on, I became convinced that education offers the best route out of poverty and misery. I stayed the course, even when my senior managers advised me to get out of the sector because the losses were hurting our company then.

“I believed that by setting up the college and admitting students, I had made a promise to our children and it was a pledge I was determined to keep, ” he shared. 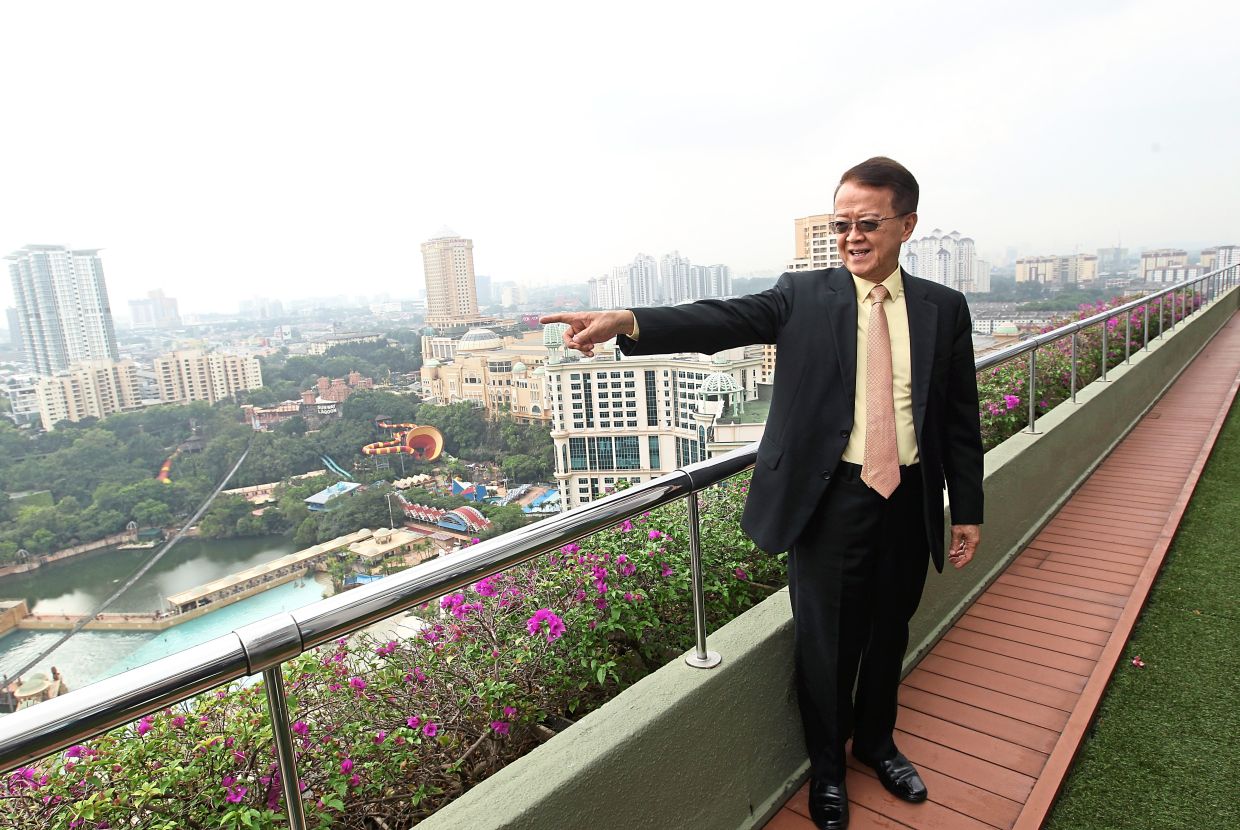 Cheah points in the direction of the Sunway Medical Centre, with Sunway Lagoon in the background.

Moreover, Cheah has also contributed much to philanthropic efforts over the years. He is the only Malaysian who has been named three times on Forbes Asia’s annual definitive philanthropy list, Heroes of Philanthropy.

This proves that for Cheah, entrepreneurship, philanthropy and even education are all means to an end: towards nation-building and creating a sustainable future for all.

The most important thing, he said, is to identify the end goal and then plan the journey to achieve that goal accordingly - but before that, he stressed on first having the ability to achieve wealth through entrepreneurship with the right values.

He said, “After all, you need to make money first before you can give it out.

“Personally for me, what I want is to build a sustainable future for the next generation to continue to excel and contribute to a progressive and prosperous society. Entrepreneurship, quality education, philanthropy and sustainability are the avenues towards reaching my goal.”

Cheah, who above all aspires to inspire before he ‘expires’, added, “I hope what we’re doing at Sunway will inspire other corporations and individuals in this part of the world to do more. We can all do well by doing good.”