IPOH: The baby boy found alive on the roof of a porch in Bercham here on Saturday (July 18) is in a critical condition and requires respiratory assistance.

Ipoh OCPD Asst Comm A. Asmadi Abdul Aziz said the baby is being treated at the neonatal intensive care unit of the Raja Permaisuri Bainun Hospital.

It was reported that the baby is believed to have been thrown out from a top-floor window of a nearby double-story house by his 16-year-old mother.

ACP Asmadi said interviews with the suspect’s family revealed that they were unaware she was pregnant.

“They did realise that she was putting on weight, and thought that was due to her being at home during the movement control order.

“When the incident happened, the suspect’s mother was out marketing, and when she got home she saw that a crowd had gathered at her house.

“The family moved to Ipoh from Rawang about a month ago, ” he said.

ACP Asmadi said the suspect’s father, a lorry driver, was not home at that time, and the suspect’s 14-year-old sister failed to realise that her sister was pregnant.

He said initially the suspect denied that the baby was hers, but after much persuasion admitted it.

“She said the father of the baby was her boyfriend who was staying in Rawang. She refused to say more and has been crying a lot. She is still admitted to the hospital, ” he added.

ACP Asmadi said investigations at the scene found blood on a bedsheet and on the grille of a window of the suspect's room.

“It is believed that the suspect delivered the baby in the toilet, and had cut the umbilical cord on her own. The case is being investigated under Section 317 of the Penal Code for child abandonment, ” he added 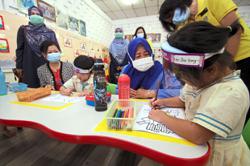 Only one baby hatch in Perak for now