Bukit Aman Marine Operations Force commander Senior Asst Comm Mohd Yusoff Mamat said that the government had approved the RM100mil allocation for the radar upgrading works, expected to be completed by end of this year.

“The system is managed and controlled by the Malaysian Maritime Enforcement Agency (MMEA) and is shared with the marine police and the Royal Malaysian Navy under the National Security Task Force operation dubbed Ops Benteng.

He said the improved Swasla would be able to alert authorities to accidents at sea or pirating activities, but added that it could not detect smaller-sized boats like those commonly used to smuggle contraband or conduct human trafficking.

SAC Mohd Yusoff said that the upgraded system was important for Johor especially, given its close proximity to neighbouring countries.

“For example, (the distance from) Kukup to Karimun Island is only 12 nautical miles and takes about 10 minutes to travel. Another is Pulau Bintan and Batam, which is 20 nautical miles apart and we can get there in half an hour, ” he said.

SAC Mohd Yusoff also said that he hoped the upgrade could remove more blind spots and enable better detection of all activities, adding that a new Swasla is currently being built at Pulau Langkawi to address the issues of boats with Rohingya refugees.

He added that the marine police would also be using drones to help cover more area.

“We have about 2,000 nautical miles to cover from Pengkalan Kubor, Kelantan to Pulau Langkawi, Kedah.

“We have about 188 patrol boats, but we can only deploy about 75% or about 140 boats per day to patrol such vast areas, ” he said adding that the remaining boats are in need of maintenance. 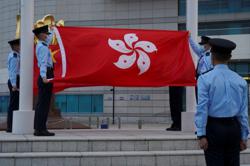