PUTRAJAYA: The Environment Ministry received about 200 complaints of blockages from hardened fat, oil and grease (FOG) in the sewerage system in just 16 days of the recovery movement control order (MCO) when many eateries resumed operations.

Its minister, Datuk Tuan Ibrahim Tuan Man, said it was important for eateries to ensure FOG was managed properly to prevent clogs as well as water pollution.

“Excess FOG can cause our sewage pipes to be clogged, which in turn will pollute the environment. It will also disrupt the treatment process at sewage treatment plants.

“The Housing and Local Government Ministry has made it mandatory for all eateries to install, service and desludge grease traps at their premises as a requirement for renewing their business licences.

“Yet, we still find cases of FOG being disposed of into the sewerage system or drainage by eateries.

“Even worse, some contractors hired by these businesses take the easy way out and dispose of FOG into the sewage pipes illegally,” said Tuan Ibrahim at the launch of Indah Water Konsortium’s (IWK) grease trap desludging services for eateries.

Tuan Ibrahim said IWK’s move to expand its services into desludging for eateries was a welcome one as not only did the national sewerage company have the expertise, it would also convert FOG to renewable energy such as biodiesel.

“Through such a service, all FOG will be treated according to environment-friendly standards, in line with the government’s target under the Green Technology Master Plan 2017-2030, where we aim to recycle sewage at a higher rate by 2030.

IWK chief executive officer Narendran Maniam said proper management of FOG would eliminate the risk of harming the environment by preventing the escape of FOG into local waterways or sewer lines.

“IWK continues to face incidents caused by grease traps that are not frequently serviced by contractors. Even more disappointing is when operators of eateries dispose of their FOG waste into the sewage system.

“This is the reason why IWK decided to expand its services from desludging septic tanks to desludging grease traps to address the issue of clogging,” Narendran said, adding that FOG collected by IWK from desludging could be converted to biodiesel. 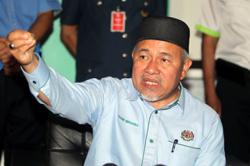