PETALING JAYA: The Sabah government's decision to allow workers from China into the state was not discussed with the Federal Government, says Datuk Seri Ismail Sabri Yaakob.

The Senior Minister (Security) said the issue was never discussed in the special ministerial meeting that coordinates the implementation of the movement control order (MCO) or in the National Security Council (NSC).

"What Sabah is doing now, I believe is done by themselves (based on their own decision) and was not discussed at the federal level or during the special ministerial meeting," he said during his daily briefing on Friday (July 3).

The country's borders were still closed to foreigners, including tourists and even foreigners who worked in the country., he added.

"Only foreign workers under Employment Pass (EP) 1 have been allowed in.

"(The EP 1 workers) need to do a swab test in their own country and a swab test here. If the tests are negative, then they are allowed in. But for other workers (with different employment passes), they are still not allowed," he said.

He said even though China was a large country, it was still considered a high-risk nation.

He added that in the NSC, they were now discussing whether they could categorise certain parts of China as a safe zone. 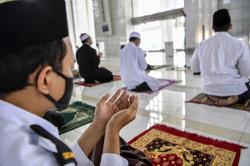