PEKAN (Bernama): Corporal Muhamad Muhaidin Haripen on Tuesday (June 30) created history when he became the first person to vote under the new normal for elections in the country.

The 36-year-old, who was the first early voter to cast his vote in the Chini state seat by-election, said the voting process was different from the three general elections he had previously participated in.

The acting chief of the Chini police station said this time, he had to abide by the special standard operating procedure (SOP) drawn up by the Election Commission (EC).

"We first have to register for polling at the entrance and observe social distancing. When we got to the first point, our body temperature was screened and we have to use the hand sanitiser, then when we enter (the premises), we use the hand sanitiser again, before the EC officer marks us with permanent ink, and then we put on the gloves and mask before voting,” he said.

The polling centre in the Chini Police Station Information Room was opened at 8am today until noon to allow 18 early voters comprising police personnel to vote.

Preventive measures against the spread of Covid-19 are enforced during the early voting process, such as social distancing, using hand sanitiser, wearing mask and gloves as well as screening of body temperature.

Muhamad Muhaidin said while previously voters would dip their index finger into the election ink, this time they would just offer it to be brushed with ink.

The brush would then be discarded to prevent the spread of Covid-19.

After that, the third polling clerk will put plastic gloves on him and only then would he mark the ballot paper.

Another police officer Corporal Wan Nur Eza Ilmi Wan Zahari, 31, said he was excited about voting during the recovery movement control order as this was the first time this is happening in the history of the country’s election process.

"Not everybody gets to vote in these conditions, this is a precious moment for me,” he said.

Meanwhile, the Health Ministry had set up a special tent in the compounds of the police station for voters with body temperature readings higher than 37.5 degrees Celsius.

The early voting process is being observed by agents of the candidates as well as the election observers appointed by the EC, while the polling process is also telecast via live streaming on the SPR Facebook account.

All the ballot boxes for early voting will be kept at the police station lock-up and counting will be done on polling day this Saturday (July 4) at the counting centre in the Information Room in the Paloh Hinai Police Station.

The Chini state seat is one of four under the Pekan parliamentary constituency. This is the first by-election to be held after the MCO was enforced on March 18. - Bernama 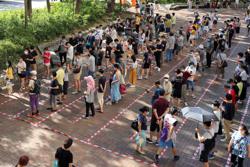 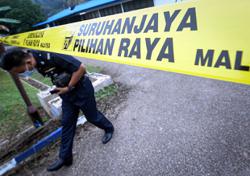