Numbers for sale: Shaharuddin (centre) and other JPJ officers showing the ‘SYG’ registration numbers which secured the highest bidders.

PUTRAJAYA: The Road Transport Department (JPJ) has assured more than two million Malaysians whose driving licence and road tax which expired during the movement control order (MCO) period that no action will be taken against them.

However, it urged Malaysians to renew them because enforcement would resume once the recovery MCO was over and if there was no extension.

“JPJ will not take action as they (drivers and vehicle owners) are exempted from renewing their driving licence and road tax under the recovery MCO period, which lasts until Aug 31, ” he told reporters here yesterday.

Affected drivers must have valid insurance while on the road, said Shaharuddin.

“We urge those whose road tax and driving licence have expired to renew them. This is because enforcement will resume once the recovery MCO ends and if there is no further extension, ” he said.

He said 855 JPJ counters nationwide would be opened seven days a week to allow people to renew their driving licence and road tax.

Shaharuddin said JPJ also netted RM3.4mil in five days through bids for the “SYG” vehicle registration numbers between June 10 and 15.

This, he said, was JPJ’s highest collection so far, which was an increase of RM100,254 compared to biddings for the “ALL” fancy series in Perak last year.

He said 3,173 bids for the “SYG” fancy series numbers were made during the five-day period, with the remaining 6,826 numbers still up for grabs through the department’s mySikap portal.

“As of May this year, the department has issued 12,694 notices for such offences, out of which 7,455 were compounded RM300, ” he said, urging people to take photographs of modified number plates and send them to JPJ for further action. 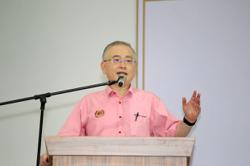