KUALA LUMPUR (Bernama): The drunk driver who collided into a motorcyclist, killing him, as he was on his way home along the Sultan Iskandar Highway early Monday (June 1) morning has been remanded at the Jalan Tun H.S. Lee Station.

He said the case was being investigated under Section 44(1) of the Road Transport Act 1987 and the suspect has been remanded for further investigation.

"Police view seriously the issue of drink drivers who endanger the lives of other road users. Police will conduct more operations to tackle this issue.

"At the same time, the public are advised to be more responsible and not behave selfishly by not driving when drunk, ” he said in a statement Monday.

Mazlan said the public with any questions or information can contact the Jalan Tun H.S. Lee Traffic Police Station at 03-2071 9999 or the Kuala Lumpur Police Hotline at 03-2115 9999 or the nearest police station.

In the 1.30am incident, Mohamed Zaili Mohamed, 44, was on his way home after sending food to his wife to sell when his motorcycle was hit by a car, believed to be driven by a drunk driver, along the Sultan Iskandar Highway, heading towards the city. - Bernama 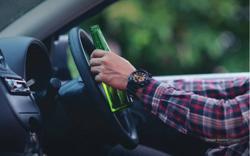 Another drunk driver crashes into roadblock