GEORGE TOWN: Several non-Muslim places of worship in the state are taking a cautious approach despite being given the green light to reopen on June 10.

He said the limited number of people allowed to enter and the fact that it could only open twice a week were cumbersome.

“Our temple spans 12ha with about 10 shrine halls, with four entrances. It will not be easy to control those who wish to enter, ” he said.

The government has announced that non-Muslim houses of worship in green zones nationwide will be allowed to reopen from June 10.

Entry will be limited to a maximum of 30 people in the premises at any one time, while children aged below 12 and senior citizens above 70 are not allowed to enter.

Ooi said Buddhist temples were different from other places of worship in that they did not have a set time for praying.

“We will have families with children and the elderly visiting at odd hours. It will not be right to turn them away because of their age.

“We only have activities that draw big crowds twice a year and the rest of the time, it’s just devotees coming here to pray, ” he said, adding that there was too many restrictions in the standard operating procedure (SOP).

Ooi hoped the authorities would re-evaluate the SOP accordingly as “we are a temple, not an association”.Penang Wadda Gurdwara Sahib chairman Daljeet Singh said

they would adopt a wait-and-see approach before deciding to reopen.“We have until June 8 to decide and inform the Malaysian Gurdwara Council. Right now, we are holding virtual prayers and outreach programmes, ” he said.

The Council of Churches of Malaysia general secretary Rev Dr Hermen Shastri previously said the churches under its aegis would remain closed until it was deemed safe to reopen.

State local government committee chairman Jagdeep Singh Deo said the decision whether to reopen on June 10 was up to the places of worship.

“The state is still monitoring the situation. We can only fully decide closer to June 10, ” he said.

The SOP for all non-Muslim houses of worship in reopening limits the number of devotees to 30 at any one time (depending on the size of the religious site), providing hand sanitiser, conducting body temperature checks and ensuring all attendees wear face masks.

Weddings are also barred at temples and churches for now. 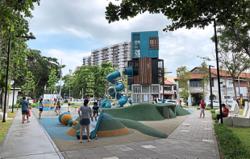