Sabah Customs seize RM1.65mil worth of cigarettes in Tawau

KOTA KINABALU: Over 110,720 cartons of smuggled cigarettes worth RM1.65mil have been seized by Sabah Customs during a crackdown under Ops Supply Raya in the east coast Tawau district.

Sabah Customs Department chief assistant director Datuk Abdullah Jaapar said that the seizures were made during the month-long crackdown that involved four main operations from April 24 to May 23.

In a statement, he said that the seizures were made at various areas including along a beach on the Tawau coast line at Batu 3, Jalan Apas, a house at Kg Sri Aman and Taman Sawit, all along Jalan Apas in the Balung area of Tawau.

However, he did not indicate if there were any arrests in connection with the seizures of the contraband cigarettes.

Investigations are underway in connection with the recovery of the cigarettes whose duties were not paid.

It is believed that the cigarettes were smuggled in from a neighbouring country. 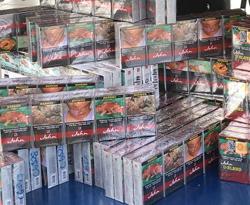 Holy smokes: Over RM11mil worth of contraband cigarettes seized