KUALA LUMPUR (Bernama): Police have increased control and surveillance of the country's waters following attempts to bring in illegal immigrants via ‘rat lanes’.

"There are attempts (to bring in the illegal immigrants) via the East Coast of Sabah and the West Coast of the Peninsular and this is being monitored.

"I personally went down to the security post at Morib Beach, Sepang to remind and motivate the police to increase patrols so that the illegal immigrants could not slip in as they bring risks,” he said at Bukit Aman here.

Meanwhile, asked about the use of drones, he said the technology was effective and has helped to monitor the movement of people during the MCO to curb the spread of Covid-19.

"Praise be to Allah, the drone technology has been particularly helpful in red zone areas. For instance, in Simpang Renggam in Johor and Sungai Lui in Hulu Langat, the drones have helped the police and Armed Forces to obtain accurate data on the location of houses.

"To go to each house in the red zone would be difficult, so we use drones which save time and reduce the risk of enforcement personnel from being exposed to Covid-19 infection,” he said.

Hamid said the drone would be flown high to see the entire red zone to track the rat lanes.

"The drones are flown at high altitudes to monitor areas that are hard to access by the police to detect the rat lanes so that roadblocks could be imposed.

"Now police have mobilised every asset to ensure the people comply with the MCO to break the Covid-19 infection chain,” he said.

On March 23, it was reported that the Armed Forces and the police were using drones and unmanned aerial vehicles (UAVs) to help with the MCO monitoring to contain the pandemic.

Meanwhile, Hamid said the presence of military personnel had improved the implementation of MCO with more roadblocks and patrols being carried out.

"We used to have issues on shelters (at the roadblocks) and so on, now (it has been resolved with) military tents and the military have logistics for such tasks,” he said.

He also assured that police had a sufficient number of personnel to carry out enforcement works throughout the MCO period.

"The task is very challenging, but the police have enough officers and members, we also have reserve personnel who can be mobilised when needed,” he said.- Bernama 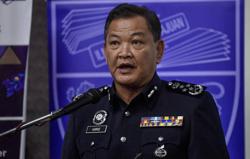