GEORGE TOWN: Despite the novel coronavirus scare, thousands of devotees took to the streets to pay homage to Lord Muruga on the eve of Thaipusam, which is one of the most colourful festivals in Malaysia.

With some wearing face masks, the devotees began the coconut-smashing ritual in fulfilment of their vows during the procession of the golden and silver chariots here.

Penang Hindu Endowment Board commissioner Datuk P. Kuvenaraju said the crowd during the procession this year was bigger, as the new golden chariot made its inaugural trip.

He said over a million people are expected to attend the three-day Thaipusam celebrations in Penang this year, which ends tomorrow, since it fell on the weekend.

Devotee K. Kannan from Bukit Mertajam said he prayed for good health and prosperity for his family and for the nation’s well-being.

“My family and I join the religious celebration annually. We shave our heads and carry paal kudam or milk pot kavadi as our way of paying penance and fulfilling vows, ” said the 41-year-old teacher at the procession yesterday.

Nora Marteni, 23, an international student from Norway, said this was her first visit to Malaysia and was glad to witness and experience such a colourful celebration. Offerings from devotees: A crowd surrounding the golden chariot as it makes it way down Jalan Datuk Keramat in George Town, Penang on Thaipusam eve. Many in the crowd were seen carrying trays of fruits and flowers as offerings. — (Below) Staff from Sunway Hotel Georgetown and Sunway Hotel Seberang Jaya giving out free food for those walking with the chariots. - Bernama/The Star

“It feels like National Day celebrations back in Norway, where large crowds pound the streets with loud music. Certainly a fun experience for us, ” she said.

Her friend Ida Sele, 21, echoed similar views and pointed out that this was her best travel experience so far. “I have travelled to many places, but not many were as colourful and joyous as this one here.”

Retiree Cheam Teng Kee, 76, and his wife Wooi Geok Keat, 73, were seen presenting offerings to Lord Muruga during the procession.

Cheam said they both have been attending Thaipusam since they were young, besides going for pilgrimages to India. “Though we are not Hindus, we never miss joining in the celebration.

“We offered fruits and flowers and also prayed for good health and world peace, ” he said.

Mechanic Tony Tan, 46, who carried a silver tray with offerings, said this was his first chariot procession.

“I usually go to the temple at night, but decided to try a different experience this year.

“I also donated money, rice, oil and sugar to the temple, ” he said, adding that he had been attending Thaipusam for the past 10 years. The piles of coconut that were heaped along the road shoulders were smashed to purify the path for the chariots.

The golden chariot, which was made in Mahabalipuram and Kumbakonam in Tamil Nadu, India, made its maiden journey from the Sri Maha Mariamman Temple in Queen Street at 6.15am.

The silver chariot began its journey at about 7.10am from Kovil Veedu in Penang Street.

Both chariots were expected to reach the Arulmigu Balathandayuthapani Hilltop Temple in Jalan Kebun Bunga around midnight.

He said some 1,500 policemen were deployed to ensure that the celebration went on smoothly.

The 126th Thaipusam festival today coincidentally falls on the same day as Chap Goh Meh, the 15th day of the Lunar New Year. 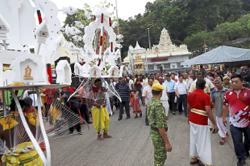 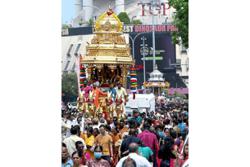