Dr M on India's boycott of M'sian palm oil: Boycott or not, we must speak up

KUALA LUMPUR: Prime Minister Tun Dr Mahathir Mohamad stands firm on speaking out against India's actions, despite it boycotting Malaysian palm oil after a political row between the two countries.

Dr Mahathir said Malaysia may now need to find another solution after the boycott of its palm oil by Indian palm oil refiners and traders, following Malaysian criticism of India's actions in the Kashmir region and its new citizenship law.

"We're concerned of course, because we sell a lot of palm oil to India, but on the other hand, we need to be frank and when something goes wrong, we need to say it.

"If we allow things to go wrong and think only about the money, then a lot of things will go wrong," he told reporters after speaking at Bank Rakyat's Integrity Forum 2020 here on Tuesday (Jan 14).

"The fact is what's happening in India today is causing a lot of unhappiness among the people there, and the whole world feels that its wrong to discriminate against others," he said.

In December last year, Dr Mahathir spoke out against India's then recently-approved citizenship legislation, which appeared discriminatory towards Muslims.

India's new citizenship law made it easier for persecuted minorities from Pakistan, Bangladesh and Afghanistan to get citizenship - but not if they are Muslims.

Kok said it was understood from discussions that Indian palm oil buyers wanted Malaysia to increase its export of crude palm oil and reduce the export of refined palm oil.

On Jan 7, it was reported by Reuters that India informally asked palm oil refiners and traders to avoid buying Malaysian palm oil, according to government and industry sources.

Meanwhile on the conflict between Iran and the United States, Dr Mahathir said the sanctions imposed on Iran not only hurt Iran but other economies too.

"I don't believe in sanctions because when you apply sanction you hurt a lot of people.

"When there is sanction against Iran, Malaysia also suffers because we also lose our market," he said.

Therefore, Dr Mahathir said that Iran and the US needed to negotiate and settle their problems, not engage in fights with each other.

On Jan 8, Iran attacked airbases housing US forces in Iraq as retaliation for the US killing Iran's general Qasem Soleimani.

On the same day, Iranian armed forces shot down a Ukrainian passenger plane, a move Iran said was a mistake after the passenger jet was wrongly identified as a cruise missile flying over Tehran. 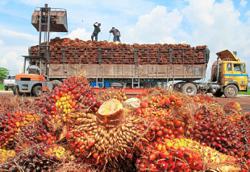