Buying endangered species from these networks is shockingly easy thanks to their use of social media, and delivery can be made within 24 hours by hiding and transporting the animals using local express buses.

In sting operations to expose the syndicates’ modus operandi, R.AGE worked with Wildlife Department (Perhilitan) enforcement officers to set up the purchase of two pangolins, which are known as the world’s most trafficked mammal.

The purchases were made with an online pet trader known as Kejora Pets, which advertises exotic animals such as dusky leaf monkeys and Asian leopard cats as domestic pets on social media. 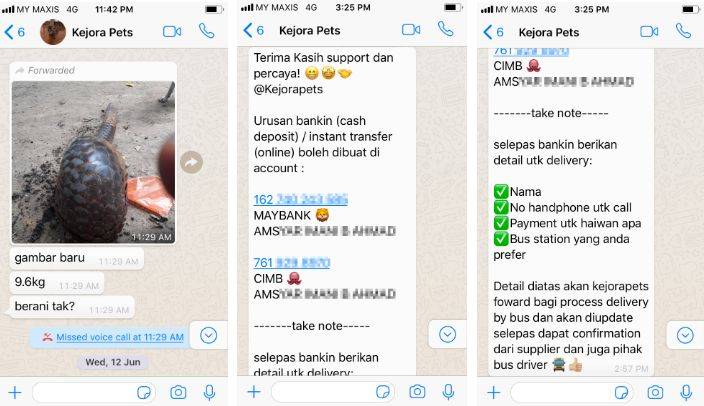 Online wildlife traders are operating so brazenly, that they even trade in critically endangered animals such as pangolins, using local express buses as part of their delivery network. Although authorities are aware of this trade, the law does not allow them to take action.

When R.AGE’s undercover journalists approached Kejora Pets to purchase a pangolin as part of its work with the Global Environmental Reporting Collective, one was offered within a week, and another not long after.

Incredibly, the journalists were asked to collect the pangolins at the busy Terminal Bersepadu Selatan transport hub in Kuala Lumpur.

After dropping passengers off at the terminal, buses usually proceed to an open-air depot where drivers park the buses before their next journey and that’s where the journalists were asked to collect the pangolins, in the middle of the night.

The first collection was completed without incident, with R.AGE given the honour of naming the pangolin when it was handed over to Perhilitan for tagging and release.

The pangolin, a female, was named Randi. 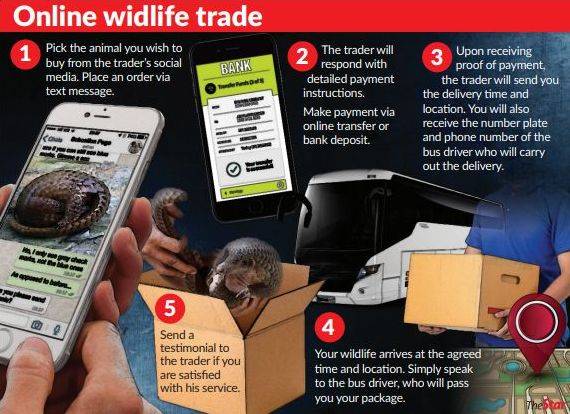 Text messages from an online wildlife trader, who takes orders and arranges for delivery of wildlife without ever coming in contact with the animal itself. Photo by Elroi Yee / R.AGE

While ordering the second pangolin, the journalists were able to trace the supply to a home in Kuantan, and followed the bus driver from the Kuantan Sentral Terminal.

Immediately after exiting the terminal, the driver stopped the bus to collect a blue storage box from a car waiting by the road, placing it into the bus’ luggage compartment.

The storage box was received by a separate team of R.AGE journalists at the bus depot in KL several hours later.

In both instances, the driver appeared to be familiar with conducting such deliveries, and was aware that he was delivering a live animal, although he did not know the species.

“Is it a snake? Or a tortoise?” asked the driver when met by undercover journalists during the delivery, and went on to say how much he charges.

“Usually around RM20 for a box, but for live animals like this, RM30.”

Even though chat messages and bank account details of the trader were documented, authorities are still unable to act because the trader never personally handles the animals.

“They have agents who send the animals directly from the poachers to the customers.

“So even though he advertises it, posts photos of it on social media and all that, the animals are never in his possession.

“Under current laws, the crime is only for possession of wildlife.” 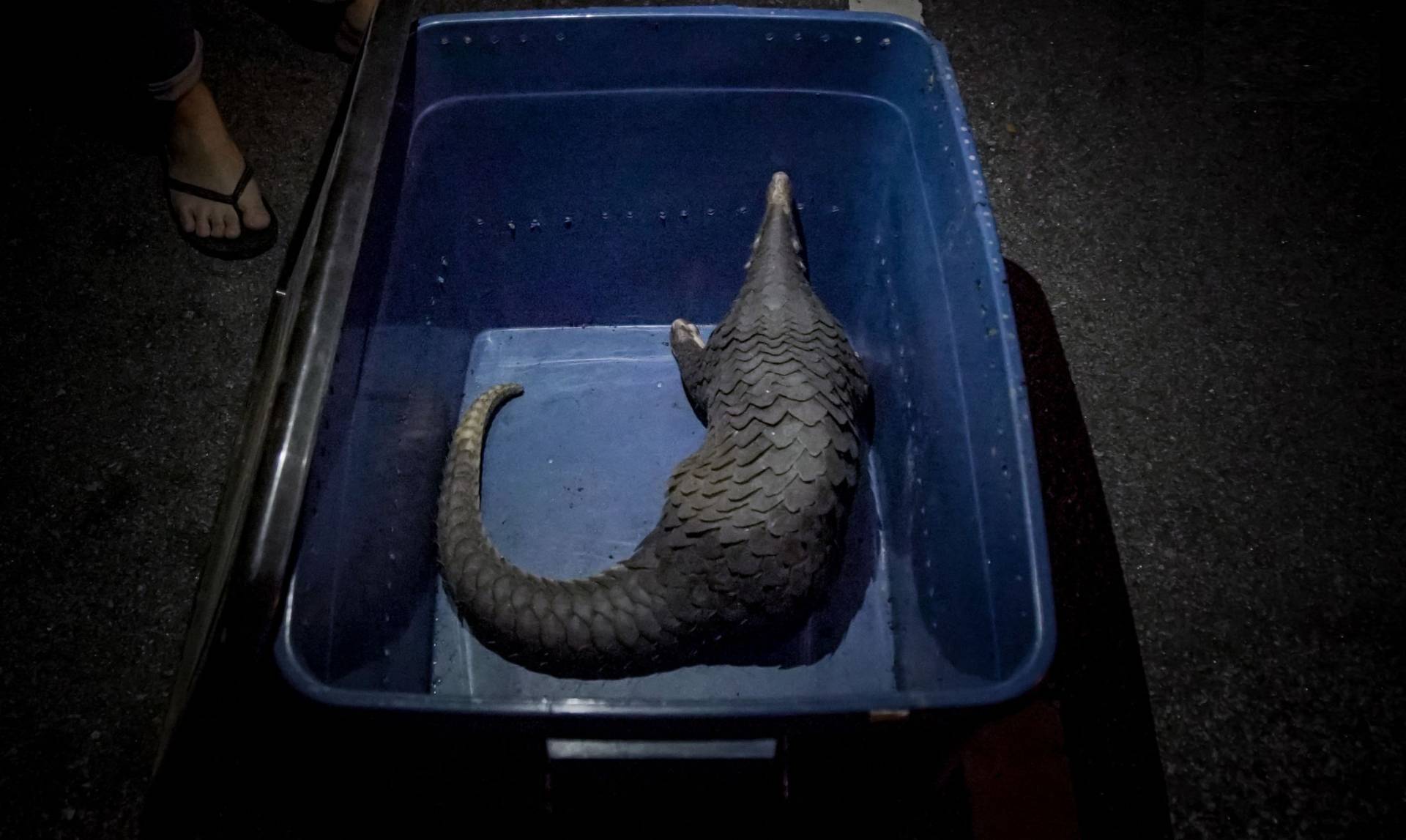 R.AGE journalists also infiltrated the Telegram channel of Kejora Pets, where he is known to be most active.

Animals found to be on sale included sun bears, gibbons, and otters.

One post was advertising what appeared to be a black jaguar. Another post showed photos and videos of masked men bottle-feeding a litter of three lion cubs, which Kejora Pets was touting for RM60,000 each.

Critically endangered animals like these and the pangolin are usually the domain of wildlife trafficking syndicates, who smuggle wildlife across borders to countries where they can fetch higher profits.

“These online traders are different from the syndicates, ” said Dr Pazil.

However, Dr Pazil added that it is possible that both syndicates and online traders get their wildlife from the same hunters. 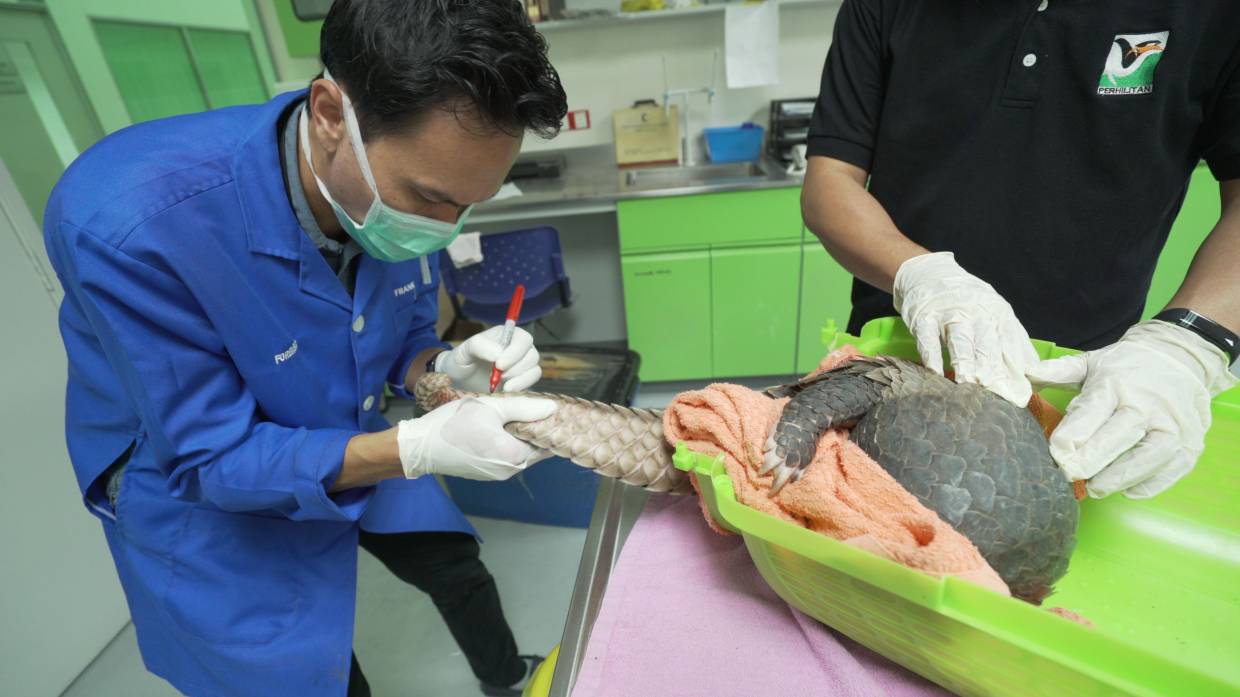 R.AGE undercover journalists worked together with Perhilitan enforcement officers to rescue two pangolins from an online wildlife trader. Both pangolins were immediately handed to Perhilitan, who released them back into the wild. Photo by Elroi Yee / R.AGE

R.AGE was in the process of setting up one more transaction where undercover journalists would receive a live pangolin from the seller in person.

However, a Facebook post complaining about Kejora Pets went viral, after which its Telegram channel became inaccessible. The seller also stopped responding to messages.

This is not the first time Kejora Pets has gone silent. According to a former wildlife trafficking researcher who has been observing the trade since 2014, every time Kejora Pets’ social media account received attention from conservationists or the authorities, he simply closes the account and starts another one.

“Although the account name is different, the bank account details are the same, it’s the same person, ” he said, speaking on condition of anonymity. A Perhilitan vet examines a rescued pangolin, before it is sent to the forest for release. The vet measures and weighs the animal, and takes biological samples. Here, its scales are being counted to ascertain species type. Photo by Elroi Yee / R.AGE

“Trying to catch these online wildlife traders is like trying to catch a shadow, ” said Elizabeth John, Senior Communications Officer of Traffic.

“Anyone can start a social media account, under any name, not necessarily their own.

“Making the necessary connections that can prove a case in court is really very difficult.”

According to Perhilitan and the Ministry of Water, Land and Natural Resources, amendments to the Wildlife Conservation Act 2010 have been drafted, which will prohibit advertising and promotion of protected wildlife.

The amendments have already gone through public and stakeholder consultations, and are expected to be tabled in Parliament in the near future.

Until these new laws come into force, these traders remain free to operate.

“People need to understand that it is against the law to keep exotic animals in their homes, ” said Minister of Land, Water and Natural Resources Dr Xavier Jayakumar, when interviewed about the wildlife trade in Malaysia.

“The only person who can give you permission (to keep exotic animals at home) is myself. I have to sign off on it. Otherwise, it is illegal and you will pay the penalty if caught.”

Elizabeth agrees that the customers are as much to blame as the traders.

“The most important thing in the fight against this trade is for people to stop buying, ” she said. “As long as there is demand, there will always be supply.”

Corruption at the border

In September 2019, R.AGE journalists uncovered evidence of the involvement of corrupt police officers in pangolin smuggling across the Malaysia-Thailand border.

Those allegedly involved range from traffic policemen to high-level officers in the Malaysian Border Security Agency (Aksem), and are mostly based in Kedah, where the Bukit Kayu Hitam border checkpoint sits on the border between Malaysia and Thailand.

In conversations with R.AGE journalists, one policeman confessed to being an operative in a smuggling syndicate. He claimed other colleagues - including his supervisors - are aware of the illegal trade.

“We have to ask our supervisors first (when they are offered money by the smuggling syndicates). If they are okay, we ask our teammates. Some might agree, some might not.

“If our team is not okay, (the smugglers) will try asking other teams, since we change according to our shifts, ” said the policeman.

This suggestion of corruption is corroborated by undercover interviews with a smuggler, who claimed the syndicate has “kowtim (taken care of) everyone from the Anti Smuggling Unit all the way to the top”.

The Anti Smuggling Unit is now known as Aksem.

Based on court records made available through sources close to the investigations, as many as three policemen have been arrested in possession of pangolins near the Thai border, including one officer who was arrested twice.

All these officers have worked, or are still working, at the Kedah state police headquarters (IPK Kedah), investigations show. 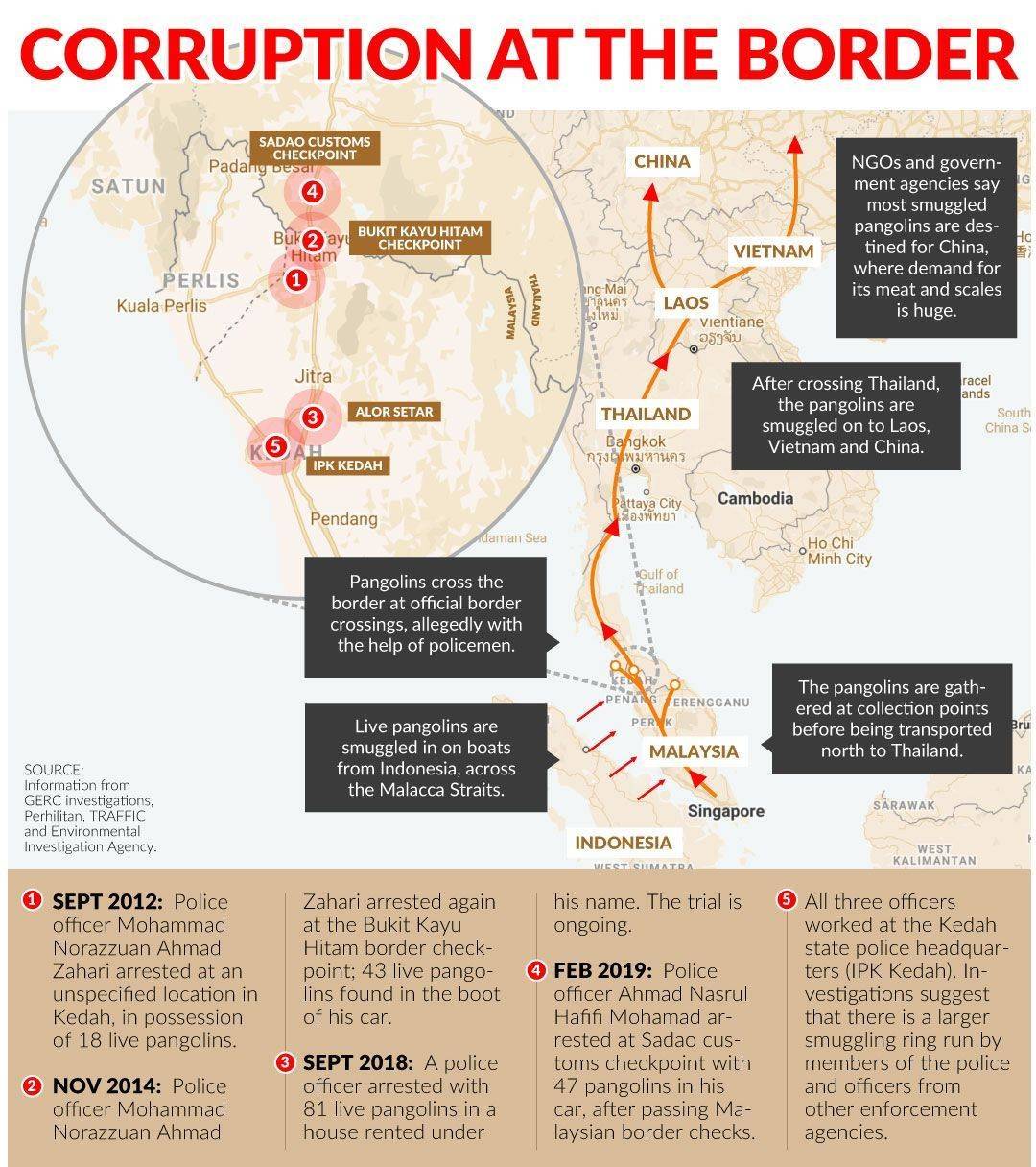 A rescued pangolin, just before it is released into the jungle. Pangolins are usually released at night, as they are nocturnal animals. Photo by Elroi Yee / R.AGE

Evidence shown to journalists by a government source close to ongoing investigations reveal a further nine policemen connected to the smuggling ring, most of whom are based in Kedah.

Based on information from the policeman, it would appear that corrupt Malaysian policemen form a crucial link in the global illegal pangolin trade, specifically between Indonesia and Thailand.

“The goods (pangolins) come from Indonesia, ” said the policeman, adding that the pangolins “do not go to Thailand, Thailand is just a transit”.

“(It goes to) China. It is trafficked to Thailand, then enters Laos. After Laos, China.”

When approached by journalists to comment on the allegations of corruption among officers in his ranks, IPK Kedah police chief Datuk Zainuddin Yaacob said the police are “taking this matter seriously”, and that action will be taken.

“If [police officers] are charged or convicted, then we can take action by suspending them from duty. If they are convicted under criminal charges, then there is no option but to discharge them from service.” 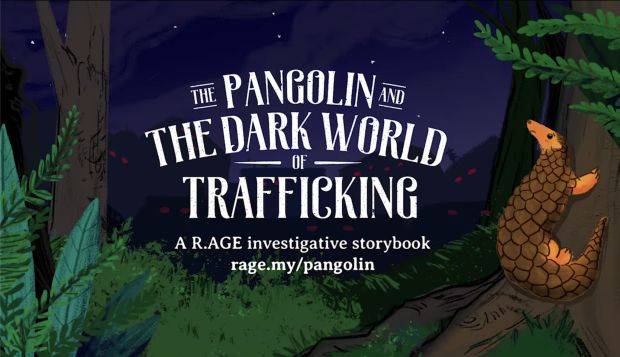