PETALING JAYA: It was a celebration to mark a new milestone.

The Star Outstanding Business Awards (SOBA) 10th Anniversary Celebration was attended by guests from various companies and organisations who have been involved in the awards throughout the years.

It was held to commemorate SOBA’s 10-year journey in championing business excellence.

The event, which was held at New World Petaling Jaya Hotel, acknowledged the success of past award winners, besides serving as a platform for participants to foster fellowship, rekindle old bonds and forge new ones.

In conjunction with its 10th anniversary, SOBA recognised past winners that have grown from strength to strength.

The recognition for SME Advocate was given to past SOBA winners who have contributed to the SME community by sharing their knowledge and business know-how during SOBA events to help them build capacity; the Pioneer (Platinum) category for SOBA winners that participated in the inaugural awards back in 2010 and won the Platinum award; the Zenith Achiever category, which recognises SOBA winners that have transitioned from an

“For a decade now, SOBA has recognised successful Malaysian businesses that have carved a market for themselves locally, regionally or internationally.

“In the decade since its inception, we have received hundreds of submissions across a multitude of industries and disciplines,” said Andreas.Among the highlights of the night were a session on “Building a Sustainable Business” by Sunway Group founder and chairman Tan Sri Dr Jeffrey Cheah.

There was also a fashion showcase titled Taste of Malaysiana, curated by the Malaysia Bumiputra Designers Association, which featured designers including Bon Zainal, Rasta Rashid, RamondZack and Tawaf Timepieces.

Organised by Star Media Group with Digi, PKT Logistics Group and RHB Bank as main sponsors, Credit Guarantee Corporation Malaysia as co-sponsor and Matrade as official trade promotion partner, SOBA 2019 is endorsed by the International Trade and Industry Ministry, supported by Bursa Malaysia and audited by BDO, with dimsum as media partner. 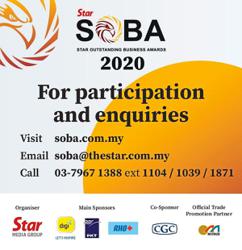