SHAH ALAM: The main suspect in the murder trial of Cradle Fund Sdn Bhd chief executive officer Nazrin Hassan went up into the master bedroom three times when his body was still there, the High Court heard.

Nur Ronal Ardes Amir, formerly with the Petaling Jaya district police headquarters patrol unit, testified that she had escorted Nazrin’s widow Samirah Muzaffar (pic) on each of the three occasions.

The first time was when Samirah wanted to see Nazrin’s remains.

“She knelt at the right side near his head and moved her body forward back and forth, looking at the remains, ’’ said Nur Ronal, adding that the firemen in the room told her to bring Samirah downstairs after about 10 minutes.

This time, she said, Samirah was carrying a cloth bag with her.

“She took something from the table on the right side of the bed and said it belonged to her husband but it was now damaged before putting it back there.

“After that, she went to a cabinet, which was in front of the bed and opened the top drawer, put her hand inside and was looking for something, ’’ said the witness.

Nur Ronal added that Samirah took a bunch of keys and said these were the spare keys to her house and said: “How could I be able to come into the room when the keys are here?’’

She also told Deputy Public Prosecutor Wan Shahida Wan Omar said Samirah also removed some foreign currency from the drawer and put it into the bag she was carrying.

On Wednesday, lead defence counsel Tan Sri Muhammad Shafee Abdullah said a police report had been lodged over some missing items from the master bedroom.

Nur Ronal said they went upstairs a third time but Samirah was not allowed into the room by the firemen.

She said Samirah then went into two other bedrooms on the same floor.

“She was ranting that her house was untidy and that she would have to do everything by herself as she did not have a maid, ’’ she said.

Samirah and two teenagers, aged 14 and 17, as well as Indonesian Eka Wahyu Lestari, who is still at large, are accused of murdering Nazrin at a house in Mutiara Damansara, between 11.30pm on June 13 and 4am on June 14 last year.

The hearing continues on Nov 8. 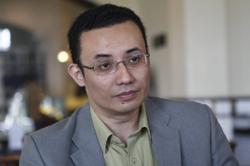 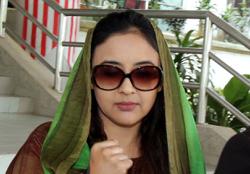