Demolition danger: Tens of square-cut granite boulders weighing an estimated 10-tonne each are stacked in twos along the crudely built dirt road outside the quarry, mere metres from village houses.

All the trees have been felled on a 120m-tall hill to make way for an illegal granite quarry at the edge of the Teluk Bahang town.

What is left of the new “Botak Hill” is a hillock of bare laterite earth. And every day, the earth is being dug away to get at the massive granite bedrock below.

Teluk Bahang townsfolk, who have been hearing the incessant knocking of granite for months, began wondering if the quarry was licensed to operate, when the operator starting stacking massive, square boulders outside of the quarry and along the access dirt road just beside their homes.

“The boulders are huge. One trailer can only carry one boulder. About two months ago, we started seeing trailers arrive every day to take

the boulders, ” said a food seller who wanted to be known only as Jamil.A source from Penang Island City Council (MBPP) said it had issued a stop-work notice to the quarry twice – in February and May – but the operator kept on working the quarry.

The source said the council would take stern action soon.

The Star sent a drone pilot to inspect the quarry, which had officially shut down in 2002.

At 500m above sea level, the drone recorded footage of a large team at work.

At the foot of the hill, square granite boulders were being cut out of an exposed bedrock of over 1ha. 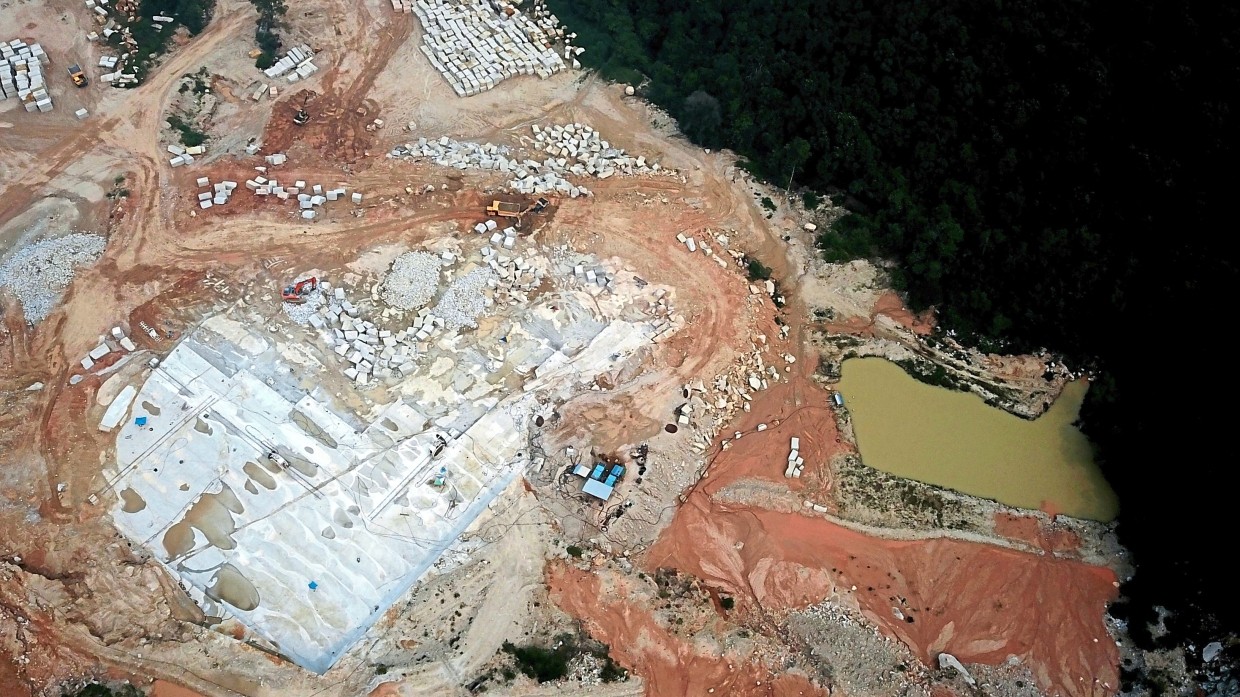 Chipping away the bedrock: While the hill in the rear of the quarry is being bared, workers are breaking up this 1ha granite bedrock, cube by cube, with each cube weighing an estimated 10 tonnes.

The exact height of the hill now is not known. Google Earth Pro’s satellite image of the hill taken in July last year showed that the hill had an elevation of up to 120m.

The hill is gradually being levelled to expose the granite bedrock that, based on satellite image measurements, is almost 4ha.

The previous time a hill was made bare was in 2013, when a developer cleared the top of Bukit Relau and scarred the hillslope with a winding road to the top, 370m above sea level.

Everyone heading to the island along Penang Bridge could see the deforestation directly in front of them, and the hill has earned the nickname “Botak Hill”.

At the Teluk Bahang quarry, drone footage captured five mounds of crushed granite, many metres tall, on the quarry grounds.

Stack and strewn all around are about 900 boulders cut into large cubes.

to inspect, an excavator was spotted stacking up the massive boulders

at the side of the crudely built dirt road beside the village.

Villagers, including two children, were seen watching the excavator stack them up from no more than 5m away.

“We don’t know anything. We thought they had the right to do it, ” said an elderly woman who lives just 10m from where 10 massive cube-shaped boulders were stacked up, two per column.

In May 2016, The Star highlighted the clearing of the quarry, which took the state government and

the local assemblyman by surprise because they were unaware

that work was being done at the quarry.

The quarry owner subsequently met The Star and insisted that he had only wanted to clear three years of overgrowth and gave assurance that it was not forest land.