IPOH: One of the two state DAP assemblymen who resigned from their party posts has defended giving up his post.

They cited dissatisfaction with the way the party was handling the case of Paul Yong Choo Kiong, the state executive council member who was charged last month with raping his former Indonesian maid.

Leong and Leow were upset over state party chief Nga Kor Ming’s statement to a Chinese daily on Yong’s status as exco member, with Nga saying Yong’s status will be discussed in the state Pakatan Harapan meeting.

Leong, who is also Yong’s lawyer, said since he (Yong) was appointed as an exco member through the party’s recommendation, his position must be discussed in the party first.

Yong is currently on leave after he claimed trial in a Sessions Court here.

In a statement yesterday, Leow said he would not withdraw the statement he made against Nga, and wanted him to resign from his position in the party.

“After much consideration, my decision to resign from the state party committee remains unchanged.

“This is in no way an attempt to destroy the party’s reputation but is a stand against Nga’s baseless statement.

“Nga had repeatedly said Yong is innocent, but this only goes to show he might have some hidden agenda,” Leow said, adding that Nga’s behaviour also changed after Pakatan won the general election last year.

“I am truly disappointed with Nga and how he chaired the state party.

“It seemed like the party has become the Nga and Ngeh (referring to Datuk Ngeh Koo Ham, former state party chief turned state party adviser) Dynasty, and he no longer applied democratic principles in the party.

“Together with Leong, we feel this is the time for us to speak up.

“We know there are many state party members who choose to remain silent because they are afraid Nga might sack them.

“Since Nga said he will be responsible for all allegations involving the party, as a member, I advise him to resign as state party chief,” said Leow.

Meanwhile, Nga described Leong and Leow’s resignation as an internal matter that will be resolved behind closed doors. 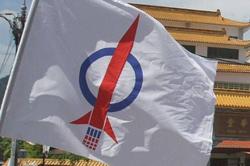