KAJANG: A man was charged with murder on Thursday (Aug 22), after allegedly causing the death of fellow motorist Syed Muhammad Danial Syed Syakir after an altercation at a stretch at KM293.5 of the North-South Expressway (NSE) on Aug 10.

The accused, Yew Wei Liang, was charged under Section 302 of the Penal Code, which carries a mandatory death sentence if found guilty.

The charge was read in front of Magistrate Nor Afidah Idris, who set Sept 27 as the next mention date for the case.

The case is handled by Deputy Public Prosecutor Siti Noor Hafizan Zakaria, while the accused is represented by counsels S. Selvam and Varghese Onny.

Clad in a black T-shirt, the 40-year-old accused arrived at the Kajang magistrates' court at around 9am from the Sungai Buloh prison. The incident between Syed Muhammad Danial and Yew, which allegedly started as a fender bender, took place at about 1.45pm on Aug 10 at the south-bound Sungai Besi toll plaza on the NSE.

After the fender bender, the two were then allegedly involved in a chase with one another, which ended when both cars stopped.

A fight then allegedly started between Syed Muhammad Danial and the accused, which was broken up by other motorists.

The two then returned to their respective cars, before Syed Muhammad Danial allegedly came out of his car armed with a baseball bat and began swinging it at the accused's vehicle.

The accused then allegedly accelerated his vehicle, hitting Syed Muhammad Danial and pinning him between the accused's vehicle and the road divider.

Syed Muhammad Daniel was taken to the Nilai Medical Centre and died there later that day.

There is nothing racial about it, say police 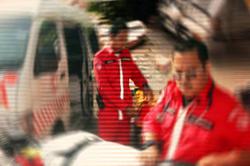