DESPITE protests from a friend, a man in Thailand had durian together with wine and died after a few hours, reported China Press.

The 48-year-old man was discovered dead at a bus stop near Pattaya.

Next to the corpse was an empty wine bottle and a polystyrene container with durian.

When the body was discovered at 6.30am on Wednesday, police estimated the man had died for five hours.

According to his friend and colleague, the man bought durian and wine after work on Tuesday with the intention of enjoying them while waiting for the bus.

The friend warned him not to do that because of a urban legend that durian and alcohol were a deadly combination.

When the friend next saw him, he was already dead.

The wife, known only as Qin, received the tickets by post. Thinking that the letter was a receipt, she chucked it into the bin.

She only realised that the tickets were missing the following day.

Rubbish in Shanghai is separated into dry, wet and recyclable categories and is usually stored for two to three days in a waste container before being collected.

Qin’s husband, together with staff in the waste container, managed to retrieve the tickets after a painstaking search through three tonnes of dry rubbish.

“Thank goodness we separate our rubbish!” the woman was quoted as saying. 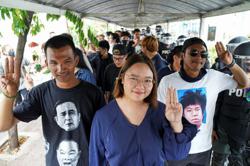