SEPANG: The national flower – the bunga raya – and Sarawak’s mascot – the hornbill – take centrestage in the new Visit Malaysia 2020 logo.

Also featured in the logo, unveiled by Tun Dr Mahathir Mohamad, are the wild fern and colours of the Jalur Gemilang.

The tagline Visit Truly Asia Malaysia 2020 – an idea of the Prime Minister – is also a twist from the old slogan of Malaysia Truly Asia. It was widely mocked by Malay­sians, with some 8,000 signing an online petition for the logo, designed to look like a postage stamp and featured an orang utan hugging a proboscis monkey and a turtle on a beach, all donning sunglasses, be dropped.

The Tourism, Culture and Arts Ministry under the new government then launched another public logo design competition.

Dr Mahathir called on all Malaysians to play a role in making the tourism campaign a success by becoming good hosts.

“Our hospitality must not be merely a slogan but translated into the nature and culture of our people. 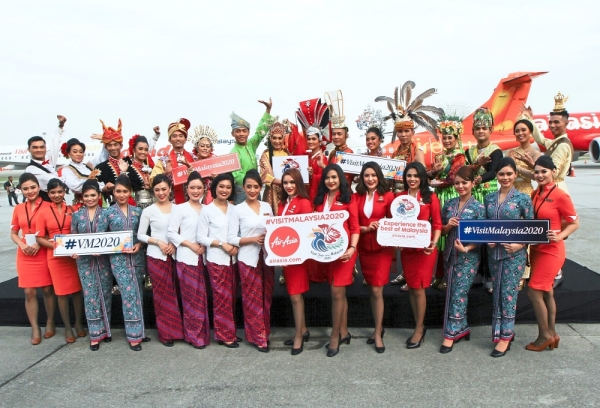 “The beauty of a place will attract but the hospitality will make people stay and return,” he said at the logo launch at KL International Airport yesterday.

Dr Mahathir noted that the country’s tourism industry had grown from strength to strength and three decades after the first VM campaign, which he launched in 1990, Malaysia had truly become popular and able to hold its own against other global destinations.

The fact that Kuala Lumpur was ranked ninth in the list of most-visited cities in 2017 is something that Malaysians can be proud of, he said.

Dr Mahathir said that Visit Malaysia 2020 is based on eco-tourism, arts and culture with a target of 30 million visitors and RM100bil in tourist receipts.

“We welcome visitors from all over to experience the uniqueness and beauty of Malaysia’s eco-tourism attractions including our rainforests, mountain, islands and beaches,” he said.

At a press conference later, Dr Mahathir said 2020 would still be a special year for Malaysians despite it not being able to achieve developed nation status as it would be the year to celebrate tourism

“We may not have many historical sites like the pyramids, but we have so far done well in tourism,” he said.

He also wanted authorities at entry points to give “service with a smile” and help ease clearance for visitors to enter the country.